Vehicle to the Priesthood by Father John Riccardo 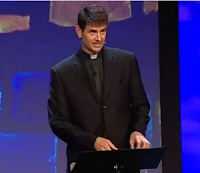 My first memory is of the crucifix in my boyhood parish, Holy Name in Birmingham, Michigan.  I do not know how old I was, but I knew Jesus had died for me and my whole life was suppose to be a response to this. This is certainly not a typical first memory but my family was anything but typical.  My father, John, was the Chief Executive Officer and Chairman of the Board for the Chrysler Corporation, and also a devout Catholic.
My father proved that religion was not just a crutch for the weak.  Every night he was on his knees before he went to bed, and even during his frequent travels he went to daily Mass.   My mother, Thelma, was initially a Methodist, but she accompanied us to Mass long before her eventual conversion to the Catholic faith.

I was the youngest of five children and my very existence occurred against the advice of my mother's doctor, because of her painful and crippling back condition.  My mom later told me that I was a gift to her and my father, and in turn, they gave me back to God.

During my childhood,  my prayers centered around my mother's bad back. Endless treatments failed to alleviate her constant pain.  When I was thirteen, one of my sisters called our mother to tell her she had just come from a charismatic prayer meeting and someone had sensed that God wanted to cure someone with a bad back.  My  sister was convinced it would be our mother.
Within a month, mom was playing tennis--completely healed--although there was no medical reason for the pain to be gone.   Two years later, she formally converted to the Catholic faith.

Growing up in this home of prayer and miracles gave me a strong anchor.  Yet, ironically, as a teenager, I began to hide my faith.  I never stopped praying, but I began to live a life as one leading to hell.  I no longer went to confession and by the time I attended college at University of Michigan in Ann Arbor, my attendance at Mass was sporadic.  It wasn't enjoyable to hear the Gospel when I was not living a holy life.

Not until my junior year in college, in 1986, did my life change. I began connecting with a group of young men for basketball games who were part of an ecumenical Christian brotherhood outreach group.   I saw men my own age who were normal guys but really knew God and were not afraid to talk about it. I began to examine my life and went through a conversion.  At this time, I  broke off a serious romantic, leaving me free to concentrate on Christian outreach to university students.

Upon graduation, armed with a degree in English and communications, I interviewed for jobs in the automotive industry.   It  soon became clear to me that this was not the life God intended for me.  So while trying to find his niche in the world, I accepted a job baking bread.  With great trepidation, I drove home to tell my father of my plans to bake bread.   I thought my dad would be disappointed.  Instead, he told me he would be thrilled with whatever I chose to do in life
even if I wanted to be a priest.   I assured him that would never happen.

Driving back to Ann Arbor that day, tears streamed down my face as I felt my life was moving beyond my own control. I wanted to follow Jesus, but as yet, I was unclear where that led.  What I was suddenly clear on, however,  was that following Jesus was not romantic; that the cross is heavy.   I realized I was not the one in control.

As I cried, the words to a Christian song, "God's Own Fool"  played on my car stereo.  "...So come lose your life for a carpenter's son, for a madman who died for a dream.  And you'll have the faith His first followers had and you'll feel the weight of the beam."

At that very moment,  I had an actual vision of our Lord in my car.  He sat next to me.  It was clear that it was Him.  I was still crying.  He reached across the seat and dug his right hand into my chest and said, "John these are all your dreams, goals and desires and everything you want to do with your life." He withdrew His hand and pulled everything out and motioned throwing it all out the window.

I said, "Lord, that's my life you just threw out the window."  Jesus then said, "John, I'm going to give you my dream, my goal, my desire and what I want you to do with your life."  And then He was gone.  I felt panicked. This was so personal.  Still, I did not know what God had planned for me.  For the next three years, I did Christian outreach with university students. For a time I seriously considered joining a Christian brotherhood of non-denominational men, but ultimately decided it was not for me.

By the time I was twenty-five, I took a job working in Ohio for Ford Motor Company in an account management training program. I was dating again and had decided to apply to graduate school.  During this time, while reading his Bible one day, I came across this passage in Matthew: "Some are incapable of marriage because they were born so; some, because they were made so by others; some, because they have renounced marriage for the sake of the kingdom of heaven.  Whoever can accept this ought to accept it.

Something stirred within me.  I thought, "Oh nuts!  I think I'm suppose to do this." I almost threw my Bible on the ground. In frustration, I cried out to God, "Lord, I don't get it.  I thought of marriage once, that didn't fit; the brotherhood didn't fit, I started dating again, that didn't fit..."

Suddenly, I heard a clear voice speaking to me:  "John, I'm inviting you to live single and to do it as a priest."  Although the voice would not have been audible to another, it was certainly not my own voice--I had never even considered the priesthood.

I responded, "Lord, if that's what you want me to do, then you better give me a desire for it, because I don't have it."  By the fifth day, I longed to know more about the priesthood.

It was late December in 1990 when I contacted the vocation director of Sacred Heart Major seminary in Detroit.  I had to wait until the next school year to be admitted, but in the meantime I could take a few classes.  As I walked into the building for the first time, a wave of peace washed over me.  I thought, "I'm finally home."  I knew on my end, with full clarity, that this was what God was calling me to. This was why I was made, which is an amazing thing to grasp.

After a year-and-a-half at Sacred Heart Seminary, I was asked to go to finish my theological studies in Rome.  Before final admission to the North American College, I needed a physical.  Although in excellent physical condition and only twenty-six,  testing indicated possible heart irregularities.  A stress test was scheduled.  After studying the results, the cardiologist questioned me about any severe childhood illnesses I may have had.  There had been high fevers and seizures but nothing more.

"No, that couldn't have done it," the doctor determined.  He told me that I had unexplainable scar tissue on my heart.  The prognosis was that it was nothing to be concerned about but it could occasionally cause shortness of breath. 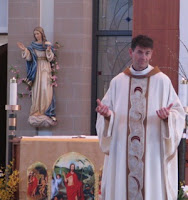 I had been in Rome for a month when I was in chapel one day meditating on the three pivotal moments in my life:  my first memory of the crucifix, the vision in the car, and the invitation to be a priest.   It was at that moment when it  became clear to me, where the scar tissue on my heart had come from. I felt like God told me, "The scar tissue is from my hand."

Often, during the Mass, at the moment of consecration, when I lift the bread and wine and it becomes the Body and Blood of Our Lord Jesus Christ, I often lose my breath and feel as if my heart is being squeezed. It is a reminder to me of the day God barged into his life, and brought me to the joy of the priesthood.