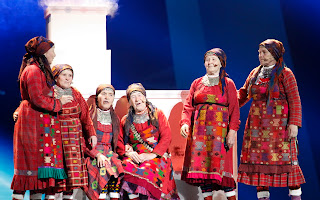 When St. Francis, knelt before the crucifix in the broken down church of San Damiano in the Italian town of Assisi, it was a moment that changed the world. “Francis, go rebuild my church, which is falling down,” he heard Christ say to him.
Francis had given up his wealth so he rebuilt San Damiano by begging for the supplies. For a group of eight Russian grandmothers, in the 300-hundred-year-old village of Buranova, they are rebuilding their church through singing and dancing. They’ve become a hip group, flying across the country giving concerts and donating much of their proceeds to rebuild the Church of the Trinity, which had long ago been destroyed during Stalin’s rule.


Traditionally, elderly Russian women, called “babushka", sit along roadsides and sell vegetables from their gardens. These women, known as the Buranovskiye Babushki, (Grandmothers of Buranovo) sang their way to fame during Europe’s pop music contest, Eurovision.  A YouTube  video of their performance shows the grannies in traditional dress, singing out, “Party for everybody—dance! Come on and dance!”

Charmed Grannies
The babushkas wearing long dresses and colorful headscarves, did not win the Eurovision contest but they stole the show, and catapulted into stardom.  Now, the group is charming audiences across Russia. They sing Beatles tunes and songs such as “Smoke on the Water” by Deep Purple, “Hotel California” by The Eagles, and songs by the Russian rocker Viktor Tsoi.  A number of Babushka Facebook fan pages are even popping up.
This novelty act could easily be looked at as just another case of discovered talent.  Except, the women are cute but not unusually talented.  So, is it their sweet smiles and advanced ages that is winning over the crowds?  Maybe. But maybe it is something more.

Divine Providence
As reported last month in the in the NY Times , their fame began with a miracle according to Olga N. Tuktareva. She was strolling about the village with a friend in 2008 and lamented the Church of the Trinity’s destruction which was taken down like countless other churches during Stalin’s Russia. 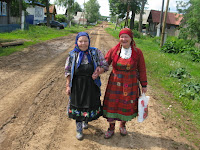 “Built in 1901, it had three altars, devoted to the Trinity, Archangel Michael and the Prophet Elijah. Party commissars closed it in 1937; 12 years later, a crew drilling for oil in the upper Volga River basin knocked down the church and carted off the bricks to build barracks for workers.

“During that walk, Ms. Tuktareva recalled, her cellphone rang. It was a music producer in Moscow who had heard of the singing babushka — they performed locally — and had a proposition: if the troupe sang the Queen song “We Are the Champions” in their native language, Udmurt, to an audience of oil executives in Moscow, the producer would make it worth her time.”

“’I thought, ‘This is strange,’ ”Ms. Tuktareva said. ‘I just said it is impossible to rebuild the church, and then my phone rang. This is not an accident.’ “
From that point on, the group won minor fame performing rock songs as a novelty act.  With the proceeds, the women set up a fund to rebuild the church—which has begun.  They were all deeply religious and had to hide their beliefs in the Soviet era.

Consolation Through Music
In spite of the fun and fame these ladies are experiencing, they have suffered through many of the hardships embodied in Russian life. The group formed out of their friendships with each other, and love of music--both a comfort during painful times.
National Public Radio reported that Elizaveta Zarbatova — who at 84 is the oldest member of the group, was widowed in 1957 when her husband was electrocuted on the job. "The music comes from the heart. The suffering comes right from my heart,” she is quoted as saying.
“Valentina Pyatchenko, 72, left her alcoholic husband in 1984, shortly before he died. She got along on her own, but it was rough. Thirteen years ago, the tiny woman was using an electric saw to build a new porch. Her lower right arm was cut off.”  Since her prosthetic arm is heavy, she saves it for concerts. 'I'm an optimist,' Pyatchenko said. 'You'll never hear me complain.'
“And there's Galina Koneva, 72. She lost her husband in 2004 to drinking and diabetes. ‘Life goes on; it's impossible to stop,’ Koneva said. ‘That's what we sing.’" 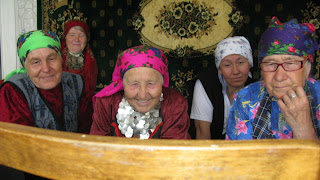 Now, not only is the church getting rebuilt, but so is the town.  Schools are sending students for field trips and visitors are coming to see the town where the grannies are from so the local government is fixing up the village.  An update on the  eurovoix website reports, “And well things have changed hugely, the local government in the Udmurt Republic have started building a water pipeline, installing street lights and giving the local school high speed internet."
These God-loving, humble and devout ladies may not be changing the world on the same level as St. Francis, but they are certainly changing the world in their little Russian village.
###