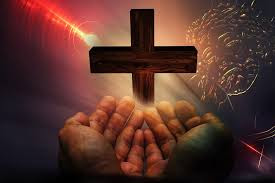 Exorcists are men in Persona Christi who gaze straight into the eyes of hell and grasp for souls against an enemy bent on destroying them. The reason to write about this ministry is to warn people against the occult and to draw them closer to Jesus Christ for the spiritual protection he offers.


In the book Holy Hacks: Everyday Ways to Live Your Life and Get to Heaven, I included a chapter on Spiritual protection with advice from 4 exorcists. Nothing is worth improving more than our spiritual life, and nothing is worth protecting more than our souls.
Although exorcists have dramatic stories of the supernatural, they chalk it up to “smoke and mirrors” to distract and scare. They stress that it is in the ordinary that we can prevent getting into trouble to begin with. A relationship with Jesus, prayer, confession, going to Mass and receiving Jesus in the Eucharist are the basic and best ways they all agree that we can protect against evil.
“I bring the authority of Jesus Christ, but most of the time, people treat exorcists like magicians,” one exorcist explained. “They want us to fix the problem, but they don’t want to put any skin in the game. They have to be willing to pray and draw closer to God.”
In possessions, he has seen eyes rolled back in the head, throwing out obscenities, bodily contortions, foul odors, temperatures drop in the room, and someone levitating. Actual demonic possession, however, is rare, but there are also infestation, vexation, and obsession. Demonic infestation involves things moving and loud noises. In vexation, a person is physically attacked and might have marks such as bruises, bites, or scratches. Demonic obsession involves mental attacks, such as persistent thoughts of evil racing through one’s mind.
Here is a brief excerpt from the chapter on some basic ways to protect ourselves.
·      Avoid evil and have nothing to do with the occult.
·      Keep your mind on God and his angels and saints. If you are stressing about evil, you are probably not spending enough time and energy on God.
·      Frequent the sacraments, which strengthen your soul with grace.
·      If you are in the state of mortal sin, run to confession. The Sacrament of Reconciliation is worth more than a hundred exorcisms; one imparts sacramental grace, and the other is a blessing to help move a person back to the sacraments.”
·      Have a personal awareness of sin because sin is the greatest evil. “Sin is a far greater danger than the devil. The devil is outside of us. Even in a possession, he cannot possess our soul.”
·      Have a relationship with Jesus and go to Mass on Sundays. “The devil is already on the run if you are going to church and especially if you are receiving Communion.”
·      Forgive others. Don’t let anger and resentment open you to evil influences.
·      Keep in mind that demonic retaliation is a good sign that you are doing the right thing. Take away the drama. It’s not the worst thing in your life. Evil spirits don’t like being kicked out, but the Lord has something to say about it.
·      Pray the Rosary. The enmity between the Blessed Mother and Satan— proclaimed solemnly by God in Genesis (Genesis 3:15) makes her the number-one enemy of demons. In Fr. Gabriel Amorth’s book An Exorcist Explains the Demonic, he said of the Blessed Mother, “The demon is terrified of her. In order to be very clear, I wish to cite an episode at which I personally assisted many years ago. During an exorcism, Father Candido asked the devil a question: ‘Why are you more afraid when I invoke Mary than when I implore God Himself?’ He responded: ‘I feel more humiliated being conquered by a simple creature than by God Himself.’”
·      Pray the Chaplet of Divine Mercy especially at 3:00 pm, the hour of mercy. God’s mercy is greater than any evil, so that we can call upon him with trust.
·      If you fear something more is going on that you cannot handle through ordinary means, talk with a priest.
~~~~~~~~
For more inspiration check out Patti's latest book: Holy Hacks: Everyday Ways to Live Your Faith & Get to Heaven. Other books include:  Big Hearted: Inspiring Stories from Everyday Families and the best-selling Amazing Grace Series.
Follow Patti at Twitter and Pinterest, like her pages at Holy Hacks, Dear God Books,  Big Hearted Families,  Catholic News & Inspiration on Facebook, and her author Facebook page.  To receive articles in your inbox, sign up at the right column.   God bless you!