Motherhood Gave Her The Will to Live

A mother looks into the face of death after being stabbed by a blue marlin and experiences God for the first time.


While deep sea fishing in Panama waters there was a tug on Denise LeBlanc’s line. She had joined a group of friends for a weeklong fishing excursion in Central America.  Each day they rotated into different pairs and departed from the mother ship onto seven smaller boats.

It had been the end of a long, slow day for fishing. That’s when a blue marlin hooked the line. Since Denise had caught one the day before, she handed the pole to her friend’s husband Mike to reel in.
A fierce fighter like the marlin usually takes a couple of hours to exhaust
enough to reel in.  It was late afternoon and the boat's captain wanted to get
back so he put the boat in reverse, allowing slack in the line to reel in faster.  They had the still-green fish to the boat within about half an hour.  The first mate estimated it to be twelve feet long and approximately six hundred pounds.
As the first mate leaned over to grab the lure, Denise could see the fish’s angry eyes glare at her.  Then, in a flash, the marlin catapulted up out of the water and lunged right at her.  The razor sharp bill gored through her right arm, through her right breast and out of her side, literally skewering her.  The enraged creature violently jerked Denise back and forth, lifting her body off the ground, as if trying to flip her back into the water.
Instinctively, she put her free hand out and it made contact with a pole and braced herself.  The bill slid out and the fish slipped back into the ocean.  Denise felt her life slipping away from her while Mike made a tourniquet and put pressure on her chest and arm. The mate cut the line and the captain put the boat into high gear. The captain headed to the nearest clinic, which was more than two hours away on Coiba Island--a penal colony for men. 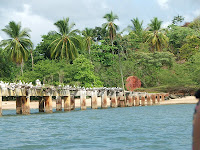 Immersed in pain, Denise expected to die. "This is it," she thought, "I am going to die, and there is no one to take care of Michelle."  Her oldest Jennifer was fifteen and independent, but Denise imagined her younger daughter nine-year old, Michelle would be lost without her.
"Damn you, God," she cried out.  "You know Michelle needs me!  How dare you? How could you do this to her!"  In a near-death situation, most people would beg for God’s mercy, but most people had not lived Denise’s life. It seemed that after a life full of pain, motherhood was her only real blessing.
When she was three years old, her first memory was of her mother being taken away in a straight jacket and ended up in and out of mental institutions.  Her father kept his own apartment in another town where he worked, and only visited his wife and eight kids on weekends. Eventually, she discovered that her dad was involved in the Mafia.  He divorced their mother, and governesses and maids mostly raised the kids.
Since their father was prone to fits of rage, the children pleaded for the release of their mother. The nine of them then tried to survive in a three-bedroom house. Their father often had girlfriends and rarely came by, so it was Denise’s mother who did her best to try and provide for the family. Often she would call their father or the local priest to beg for groceries.
When Denise was a young adult and her father survived a brain tumor, he had a conversion and finally took an interest in his children. Within a few short years, however, he died of lung cancer. Denise felt betrayed. "It took my whole life to get this man to love me and now you've taken him away from me!" she cried.
Over the next decade, Denise’s life became a series of failed attempts at

love:  two marriages, an abortion, miscarriage, and then the devastating loss of her beloved sister Darlene from breast cancer at age thirty-seven. It was the only sibling Denise felt close to. She sunk into depression and turned to gambling. Denise became suicidal in spite of the fact that she had two children whom she loved.  "What kind of mother gambles away her children's electricity?"  she asked.  But thinking of her daughters, Denise realized she need to get help and do better for them.
Counseling and Gamblers' Anonymous helped, but Denise could not complete the step that required giving everything over to a Higher Power. She did not trust God to take care of her.  She got back on her feet but had not included God in her recovery.
So on the boat, believing that death could soon take her from her daughters, Denise cursed God.  But as she cursed, an indescribable feeling overcame her.  “I was completely enveloped in a love that was more intense and at the same time gentler than anything I ever imagined,” Denise said.  “My anger and fear evaporated, replaced with a radiating sense of peace and trust in God.  I was in His hands.  Whether I lived or died, I trusted God fully.  Whatever happened, my daughters would be all right.  I knew God loved us and He was with me.”
Her nightmare was far from over, but the powerful touch of God -- although it
lasted but a moment -- sustained her and would change her forever. There was still the two-hour boat ride to the clinic on the penal colony where lesser-sentenced prisoners roamed freely kept at bay by armed soldiers. Even returning to the states brought challenges as Denise’s recovery remained at a standstill for many months. But from the moment Denise felt the love of God everything changed and his peace sustained her. “Once, it was only my motherhood that gave my life purpose and power,” she said. “Now, God is at the helm.”

This is an excerpt from Denise’s first-person account in the collection, Amazing Grace for Mothers where this dramatic story includes Denise's harrowing and horrify trip to the penal colony and shocking medical discovery after her return home.

Patti Maguire Armstrong and her husband have ten children. She worked in the fields of social work and public administration before staying home. Patti is an award-winning writer, speaker and was managing editor and co-author of Ascension Press’s Amazing Grace Series. She has appeared on EWTN, and Catholic TV as well as radio stations across the country.  Her latest books, Big Hearted: Inspiring Stories from Everyday Families, (Scepter Publishers) and children’s book, Dear God I don’t get it (Liguori Publications) will be released in Spring 2013.