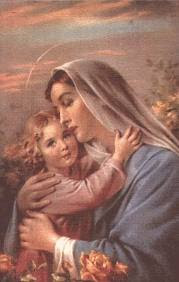 You are a dummy if you do not friend the Blessed Mother, the best thing this side of God. Mary is the very best friend we could ever have. Yet, there are some out there who don’t even bother accepting her friendship.

In general, Protestants don’t include her in their social circles but there are also plenty of Catholics who don’t bother with her. That’s even dumber than splitting from the Catholic Church. Ironically, the Protestant Fathers actually had a devotion to Mary.

Protestants Lost that Loving Feeling
The longer and the further Protestant strayed from the Catholic Church, the more watered down all the Catholic Truths became including their love and devotion to Mary.  But originally, the three main fathers of Protestantism loved their heavenly mother. (Excepts taken from my book, Catholic Truths for Our Children, Scepter Publishing)

“Surprisingly, devotion to Mary was once very acceptable for Protestants.
Luther, Calvin, and Zwinglini, the three fathers of the Reformation, each affirmed the Catholic doctrines that Mary is the Mother of God and a Perpetual Virgin.

“Martin Luther:  ‘In this work whereby she was made the Mother of God, so many and such Good things were given her that no one can grasp them...Not only was Mary the mother of Him who is born (in Bethlehem), but of Him who, before the world, was eternally born of the Father, from a Mother in time at the same time man and God. ‘  (Weimer, The Works of Luther, English transl. by Pelikan, Concordia, St. Louis, v.7, p.572)

“John Calvin:  ‘It cannot be denied that God in choosing and destining Mary to be the Mother of His Son, granted her the highest honor...Elizabeth calls Mary, Mother of the Lord, because the unity of the person in the two natures of Christ was such that she could have said that the mortal man engendered in the womb of Mary was at the same time the eternal God.’  (Calvin Opera, Corpus Reformatorum, Braunschweig-Berlin, 1863-1900, v. 45, pp.348, 35)

“Calvin:  ‘There have been certain folk who have wished to suggest from this passage (Mat 1:25) that the Virgin Mary had other children than the Son of God, and that Joseph had then dwelt with her later; but what folly this is!  For the gospel writer did not wish to record what happened afterwards; he simply wished to make clear Joseph’s obedience and to show also that Joseph had been well and truly assured that it was God who had sent His angel to Mary. …Scripture speaks thus of naming the first-born whether or no there was any question of the second.’ (Sermon on Matthew 1:22-25, published 1562)

Zwingli:  ‘I firmly believe that Mary, according to the words of the Gospel as a pure Virgin brought forth for us the Son of God and in childbirth and after childbirth forever remained a pure, intact Virgin.’  (Zwinglil Opera, v. 1, p. 424.)”

Points for Dummies
If you have neglected the Blessed Mother, consider some key points.

·  When you need a miracle, remember that a good word put in by the Blessed Mother at the wedding at Cana resulted in his first recorded miracle.
·  .God chose Mary for His mother from all eternity to get closer to us.  The human nature of Jesus is from her human nature.
·  When we honor Mary, we follow Jesus as he followed the Fourth Commandment and honored his mother.
·  Mary’s queenship is based on Old Testament tradition. In the monarch of King David it was the King’s mother people went to with their requests. Keeping in mind that Jesus descended from the house of David and the Bible repeatedly brings out the strong connection, Catholics follow the tradition already clearly laid out in the Bible.
·  Devotion to Mary is based in the New Testament.  “Hail Mary, full of grace, the Lord is with you” (Luke 1:28),  “Blessed art though among women, and blessed is the fruit of thy womb” (v.42).   The next part, “Holy Mary” comes from, “you have found favor with God” (v. 30) and “Mother of God” comes from “mother of my Lord” (v.43).  The rest, “Pray for us sinners now and at the hour of our death.  Amen,” is a request to Mary to pray for us.  The Hail Mary is completely Biblical and focuses on the divinity of Jesus, so it is a Jesus-based prayer.
·      Our earthly mother gives us life, while Mary, our heavenly mother gave us supernatural life by consenting to the plan God laid before her, to give birth to our Savior and in turn bring Him to us.

·      If God has so honored Mary as the daughter of God the Father, mother of God the Son, and spouse of God the Holy Spirit, how could we do otherwise?

·      We look with reverence on everyone and everything associated with Jesus Christ. Who could have been closer to Him than His own mother? The highest amount of holiness would be required.

Mary told the men who carried the jars of water, at the Canan wedding,  “Do whatever he tells you.”  She’s got our backs and she has the ear of Jesus. The Blessed Mother brought Jesus closer to us and she tells us to follow whatever Jesus tells us to do. So don’t be a dummy, put her on your friends list, because any friend of Jesus should be a friend of yours.