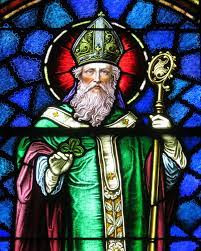 March 17, St. Patrick’s Day, is a religious holiday that has spread into the popular culture – just like the Catholic Irish people have spread throughout our population. More than one in ten Americans are Irish.

Regardless of who your ancestors are, the saints are patrons to us all – related through the One Body in Christ. If you don’t have a drop of Irish blood, don’t let that stop you from joining in the St. Patrick’s Day celebration. After all, St. Patrick was not Irish either. He was born in 387 in Britain, which was controlled by Rome at the time.

As a young teenager, Patrick was kidnapped by a raiding party and taken to Ireland where he was forced to herd sheep as a slave.  During this time, Patrick turned to God in a big way – praying and uniting his thoughts and will to God’s own. Ireland was a land ruled by a King and influenced by the pagan Druid practices although there had been some missionaries that had come to the land previously, but without great success.

After six years, when Patrick was around 20 years old, he had a dream or vision in which he was told to escape to the coast where a ship awaited. He had no money to pay for passage, so the captain angrily sent him on his way.  Patrick got off the ship but after praying, the captain had a change heart and allowed him on board.

Upon his return home, God remained at the center of Patrick’s life. He entered a seminary in Rome and became known for his piety.   But his next move was positively courageous.  He asked permission to return to the land of his slavery. Patrick claimed to hear the voices of the children of Ireland, calling out to him.

On March 25, 432, Patrick and his companions arrived in Ireland. Hearing the Gospel message in their own native tongue had a powerful effect on the Irish people. The Gospel spread rapidly, and he opened schools and churches.  Patrick became known for performing miracles which further drew people towards his message of Christianity.

It was an Easter Sunday standoff between Patrick and Druidism that opened the heart of Ireland’s king and paved the way for Catholicism to really take root.   A decree had gone out the previous day that all fires must be extinguished throughout the kingdom until the signal flame would be started at the King’s castle. No fire could burn until the new lighting of the pagan fire, under punishment of death. Patrick went ahead and lit the Easter vigil fire first.   King Laoghaire called for St. Patrick to come to see him the next day.

It is said that the Druids and magicians used everything at their disposal to sway the king – incantations, spells, and warnings. During that time, a cloud of darkness spread over the area.  Patrick challenged them to remove the cloud, but all their incantations failed. Patrick prayed and the cloud lifted, revealing the sun’s bright rays.

Patrick was granted permission to preach the Gospel throughout the kingdom. This he did in fullest measure until his death on March 17, 461, forever sealing his status among the Irish as a beloved hero; one who loved them enough to return to the land of his captivity to bring them to Jesus Christ.

Legend has it that while preaching, Patrick often used the shamrock – a three leaf clover – to explain the Trinity: three persons in one God. Patrick’s success was spectacular in converting Ireland from a pagan to a Christian land. Although historically, Protestants from England have battled with the Irish Catholics for their turf, the country is overwhelmingly Roman Catholic to this day. This island, west of the country of Great Britain, is home to approximately 4 million people. Politically, the southern 5/6 of the island consists of the state Ireland with the remaining sixth, Northern Ireland, under the rule of Great Britain. According to official government statistics collected during the 2002 census, 88.4 percent of the Irish are Roman Catholic.

The United States customs of celebrating St. Patrick’s Day with green beer and parades are more American than Irish.  In Ireland, St. Patrick’s Day has traditionally been a religious occasion beginning with Mass. Shops and businesses (excepting restaurants and pubs) were all shut down on that day.  During the 1990’s however, the Irish government began to take advantage of the opportunity to bring in tourism. The cities of Ireland now host parades, sporting events, parades, concerts, fireworks, and theater productions on St. Patrick’s Day.

Happy St. Patrick’s Day to everyone! St. Patrick, pray for us to one day be with you in Heaven.