Show the Devil Didn't Want You to See 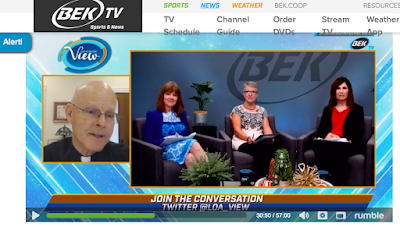 “My computer crashed this morning—I’ve never had that happened— so can we reschedule?” Dr Richard Gallagher, the world’s leading psychiatric consultant on demonic activity and author of Demonic Foes: My Twenty-Five Years as a Psychiatrist Investigating Possessions, Diabolic Attacks, and the Paranormal was scheduled to be a guest on my TV talk show that day via zoom.

“Is there a way you can get to another computer?” I asked. “The chief exorcist for the diocese of Washington D.C. Msgr. Stephen Rossetti is scheduled to follow your interview. I had wanted you both on the same show.”

“When I get to the hospital in a little bit, I’ll see if there’s a computer I can use ,” he said.

Dr. Gallagher called later explaining there was a computer at the hospital he could use. So, we went ahead as planned. However, problems continued. If you watch Ladies of Another View with Dr. Richard Gallagher and Msgr, Stephen Rossetti, it’s clear I’m killing time in the first segment. Even though Dr. Gallagher was unmuted on Zoom, we could not get the sound to work. We ended up in the second segment just putting him on the phone.

Msgr. Rossetti’s interview went off without a hitch but when the show aired thirty-minutes later as it always does, it kept blacking out and there was no sound. Technicians could not figure out the problem. We had to re-air it another day. By then, everything worked fine.

Had the devil caused interference? That’s my guess. It was an especially powerful opportunity since the show is secular, reaching a wide audience with a message the devil certainly did not want people to hear.

As a psychiatrist, Dr. Gallagher recognizes the criteria to look for such as an evil spirit being able to speak foreign languages or having superhuman strength or levitating. “It’s something very different than mental illness,” he explained. “With oppression, you are going to see something completely out of the ordinary that you are not going to be able to explain by mental illness.”

He told the story of Julia—a pseudonym for an actual patient. “She was a [satanic] high priestess and she was, according to the two exorcists who worked with her and then consulted me, the most flamboyant case they had ever seen, and these were very experienced guys…. I had about nine people tell me that she had levitated during the exorcism and spoke foreign languages that she had no way of knowing.”

Dr. Gallagher also shared personal experiences. “Our cats went wild one night; this was the day I was going to meet her. When she came to meet me—and I had never met the woman before-- she said: ‘How did you like those cats last night?’

“Perhaps the spookiest thing was I was talking to the exorcist on the phone, and  I had to say, ‘Father, I cannot come to witness this exorcism’….The voice I had heard in her possessed trance—which she never remembered, by the way—all of a sudden came in on the telephone even though we knew she was a thousand miles away.”

Dr.Gallagher shared that ultimately, the person who is possessed has to choose to turn to God if they are going to be delivered. Julie, in the end, was not willing to denounce the cult.

Next on the show was Msgr. Stephen Rossetti, the chief exorcist for the archdiocese of Washington D.C., a licensed psychologist, instructor at the Catholic University of America, and author of Diary of an American Exorcist: Demons, Possession, and the Modern-Day Battle Against Ancient Evil.

He shared that exorcists help people from all faiths. Even an atheist came to him recently. Her mother had demonic problems before her, and a priest liberated her. So, when she had trouble, she came to Msgr. Rossetti. “I said to her, I want you do know we are going to be praying in the name of Jesus, and she said okay. That’s how we do things.” He said that the woman walked in an atheist and when she left she told him: “Well, I think there’s something here.”

Are there more cases these days? “Well certainly exorcists are swamped—I am swamped,” Msgr. Rossetti answered. He blamed people not practicing the faith anymore. “The faith is our protection,” he said.“If you want to protect yourself, go to Mass, go to confession, hold onto Mary’s mantle.”

Msgr. Rossetti warned: “People dabbling in occult stuff is an invitation to Satan.” He noted that curses can sometimes have a real effect, because people are calling on Satan’s power thereby aligning themselves with him. But being in the sacraments and praying offers protection. “They are cursing me like crazy, but God protects me. If he didn’t protect us, every exorcist in the country would be dead.”

For anyone suspecting demonic activity, Msgr. Rossetti tells them to start by going to their parish priest and asking for deliverance prayers over them. Most people are not possessed, he said.

Msgr. Rossetti pointed to abortions and any wrongful death as demonically inspired. He also says one of the first signs of demonic oppression is something we are seeing in our country: violence, terrorism, anger, and discord.“We are seeing an increase in violence against the Church,” he noted.“These kinds of things were rare when I was a kid.”

Msgr. Rossetti gave a blessing of protection at the end of the show,  advised us to do reparation for sins and to: “Ask our Blessed Mother to spread her mantle over this country and pray and live a holy life.