Pray the Rosary! It Drove Communism Out of Brazil 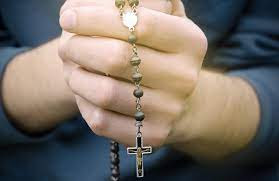 The rosary is a spiritual weapon of mass destruction, leaving sin in its wake and laying the ground for miracles, conversions, and victories over evil, attained by Jesus through the intercession of his mother. It is the prayers of the life of Christ through Mary—just as he chose to come to us through his Incarnation.

There’s a reason that the Blessed Mother told us in many of her apparitions to pray the rosary daily. Stories of prayers answered through the rosary abound. One of my favorites is how praying it drove out communism in Brazil.

On March 19, 1964, Catholic women of Brazil picked up their most powerful weapon—the rosary—and drove communism from their country.  The oppressive President Joao Goulart had appointed many communists to positions of leadership. Humble, faithful women understood the power of the Blessed Mother’s intercession and formed rosary groups. They showed up at political rallies and drown out speakers by loudly praying the rosary.

The event which took place in the city of Belo Horizonte during a communist rally was written about in Father Donald Calloway’s  book,  10 Wonders of the Rosary. President Goulart had orchestrated a rally there, calling for a communist revolution in Brazil. The archbishop of Rio de Janeiro, Cardinal de Barros Camara, went on national radio pleading with people to live the Fatima message in order to overcome the communist threat.

“President Goulart was so enraged by the archbishop’s message that he insulted the people of Brazil in a public speech and ridiculed the rosary, saying that it was the communist ideas that would reform and save Brazil, not the rosaries of simple women,” Father Calloway explained.

Those were fighting words that fired up the prayer warriors. They showed up to the rally in Belo Horizonte which was led by the president’s brother-in-law and expected to be the biggest one yet,

Father Calloway wrote: “As it was taking place, more than 20,000 women marched into the streets with rosaries in their hands to engage in spiritual battle!  They marched right into the midst of the communist rally and prayed the rosary so loudly that they shut it down.”

Six days later, on March 19, more than 600,000 people marched through the streets of Sao Paolo praying the rosary. It was called the “March of the Family with God toward Freedom.” Even non-Catholics joined in.

Within two weeks on April 1, a military coup deposed President Goulart who then fled the country. In thanksgiving for the victory, the people of Brazil organized another march in gratitude to Our Lady and her rosary. It was held the very next day, April 2, through the streets of Rio de Janeiro and called the “March of Thanksgiving to God.” Over one million people participated.

Our Lady of the Rosary, pray for us!

Sacred Heart of Jesus, have mercy on us!