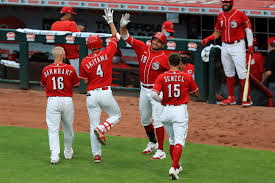 This story by Hal McCoy is taken from Amazing Grace for Survivors. The Hall of Fame Sportswriter shared how he managed to keep covering baseball after becoming legally blind.

The first time it happened was an August night in 2000. I was walking up to the press box in St. Louis’s Busch Stadium, where the hometown Cardinals were playing the Cincinnati Reds, the baseball team I’ve covered for the Dayton Daily News for the last 31 years. Suddenly, everything went blurry in my right eye.

I couldn’t make out the people next to me. I rubbed my eye, figuring the blurriness would go away. 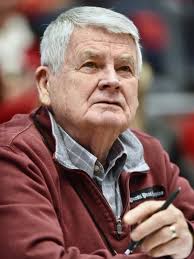 It didn’t. I managed to report the action that game using just my good eye.  To do my job, I had to see everything that happened on the field, from the swagger after a home run hitter’s swing to the spin a pitcher puts on his deliveries.

Back at home, my wife Nadine went with me to a specialist. “There’s good news and bad news,” he said. The bad news is the vision in your right eye is never going to get better. The good news is that there’s only a fifteen percent chance of it happening in your left eye.”

It’s amazing how quickly your body adjusts. My left eye compensated for the right one—immediately. Though I’d lost 50 percent of the vision in my right eye, I barely noticed. By the end of the season I had all but forgotten my problem.

Two years passed. Good years. My three boys were fine men. Nadine and I were as deeply in love as two people can be. In December 2002, I learned I would be inducted into the writer’s wing of the National Baseball Hall of Fame—the highest honor a baseball writer can receive.

In a few weeks I would be headed to Sarasota, Florida, where the Reds would begin training for the coming season. One morning downstairs, Nadine was getting ready for work as a math teacher at a Catholic school. I got up from bed and everything was dark and fuzzy. I felt my way down the hallway stairs and into the kitchen. Nadine was a blur.  “Honey,” I said, my voice quivering, “it’s here. I got it in my left eye too.” I started sobbing. All I could think of was, My career is my life. What am I going to do?

Nadine drove me straight to the ophthalmologist. “Look,” he said. “You have your wife, your sons and you’re in good health otherwise. You’re strong enough to handle this, Hal.”

I wasn’t so sure. We left the doctor’s office and headed to the Daily News. I had to tell the sports editor, my boss, Frank Corsoe, that I was through.We walked into his office. I handed him the doctor’s report. “I’m going to have to retire,” I said.

“Don’t let this thing beat you,” Frank said. “We’ll help you. Go down to Sarasota with the team next month. See if you can do it.”

My first day in Sarasota I went directly to the ballpark. I knew the Reds clubhouse like the back of my hand. I looked around. Now the players were just fuzzy shapes. I stood in the doorway in a daze. Aaron Boone, then the Reds third baseman, came over to me. “What’s wrong?” he asked.

Aaron grabbed me by my arm. “I don’t want to hear you use the word quit again,” he said. “The guys in this clubhouse will help you any way we can. But you’ve got to help yourself.”

I agreed to stick it out a few more days. It wasn’t easy. I would walk through the clubhouse and knock things over. At night, I called Nadine and poured out my frustrations. “Things are going to get better. You just have to believe,” she assured me.

But they didn’t get better. The Reds played day games in Florida. I couldn’t see where the ball was hit or the print on my computer screen. One day it took me seven hours to write a story that normally would have taken me  two hours to bang out.

I called my editor. “I want you to promise me something,” I said. “If my writing isn’t up to snuff, tell me. I don’t want to be carried.”

“You can do this, Hal,” Frank reiterated. He arranged to get me a laptop computer with enlarged type onscreen. One of my colleagues, Bob Nightengale, wrote a story about my battle. I started getting emails from readers who said they were praying for me. They begged me not to quit, said that without my stories their mornings wouldn’t be the same. I can’t tell you how those people lifted my spirits, especially their prayers.

Near the end of spring training I went to Tampa. The Reds had a night game against the New York Yankees. We got there late in the afternoon. I interviewed some players and then walked onto the field. The late afternoon glare was blinding. A New York Post writer, Kevin Kernan, had to lead me upstairs to the press box. I looked at the field. All I could make out were shapes moving around.

I bowed my head. Help me, Lord. Can I do this anymore? Help me see the truth. I looked up. The sunset. The glare disappeared, and the stadium lights were on. I couldn’t believe it. For the first time since coming to Florida, I could make out the players on the field and the words on my computer screen. Not well, but enough to get by. Well enough to do my job. It struck me: The Reds play most of their regular-season games at night under these same arc lights. I would soldier through the few games played in bright sunshine. My press box colleagues would help. I grabbed a phone and called Nadine. “I can do this!” I said.

At the end of spring training the Reds returned to Cincinnati to start the season. My editor arranged for a driver to take me to the ballpark every game. “Your work has been great,” Frank said. Sometimes I think my reporting has gotten better. Losing my eyesight has made me a better listener. I am more attuned to what players are feeling and to the subtle rhythms of the game.

[In July, 2003] I was officially inducted into the Hall of Fame. As I stood at the podium, I thought, Maybe God is showing me there’s a purpose in this. So I told the audience what my setback brought home to me: “Don’t ever give up on yourself. Don’t ever give up on something you love.”

In a near-unprecedented sports writing career covering half a century and over 25,000 bylines, Hal McCoy shared his story in, The Real McCoy: My Half Century with the Cincinnati Reds

Follow Patti on Pinterest, like her pages at Holy Hacks, Dear God Books,  Big Hearted Families,  Catholic News & Inspiration on Facebook, and her author Facebook page.  To receive articles in your inbox, enter your email in "Feedburner" in right column.   God bless you!
Posted by Patti Maguire Armstrong