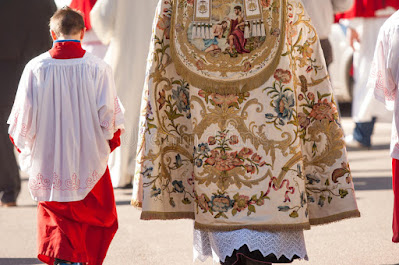 This story happened 21 years ago between Pbro José Rodrigo López Cepeda and a young altar server named Gabriel. The priest stated on his Facebook page: “It has been published on many platforms is no longer mine. It is of all who make it theirs because the great protagonist is  ‘Jesus ‘ in Gabriel and that kiss that many would like to perceive.” Here is what happened in his own words.

Six months after being ordered, my bishop sent me to run a parish; I had to replace a priest who had been there for over 30 years, so I noticed the coldness of the inhabitants of this place. The task was hard but fruitful and I wouldn't have had this much success without the help of a little boy named Gabriel.

The second week after I got there, a young couple with their very special (Down Syndrome) son introduced me to him. They asked me to accept him as an altar boy. I thought about rejecting him not because he was a child with different abilities but because of all the challenges when I started my ministry at this place. But I couldn't say no because when I asked him if he wanted to be my Altar boy, he didn't answer me, but he hugged me very tight. What a way to convince myself.

I made an appointment for next Sunday. Fifteen minutes before the Mass, he was there punctually with his red cassock and alb that his grandmother had handmade for the occasion.

I must add that his presence brought me more parishioners because his loved ones wanted to see him make his altar boy debut. I had to prepare everything necessary for the Mass. I didn't have a sacristan or a bell ringer so I had to run from one place to another, and it wasn't until the Mass began that I realized Gabriel didn't know how to help with Mass; because of the rush, I had to say: ′′Gabriel, you have to do everything I do, okay?”

A child like Gabriel is the most obedient child in the world, so we started the Mass and when we embraced the altar, the little one stayed attached to it. In the homily I saw that the parishioners smiled as they watched me, which made my young priestly heart happy, but then I realized they weren't looking at me but at Gabriel who was always trying to mimic my moves. In short, this is one of the details of this first Mass with my new Altar boy.

When I finished I told him what to do and what not to do and among other things I told him the altar can only be kissed by me. I explained to him how the priest joins Christ in this kiss. He looked at me with his big interrogating eyes without understanding the explanation.

And, without taking in what I told him, he said to me, ′′ Come on, I want to kiss him too." I said to him again and explained why. Finally I told him I would do it for both of us. It seemed like he was satisfied.

But the next Sunday, when Mass started and I kissed the altar, I saw how Gabriel laid his cheek on it and left the altar with a big smile on his little face. I had to tell him to stop doing this.

At the end of the Mass, I reminded him: “Gabriel, I told you I'd kiss Jesus for both of us.”

Seriously I said to him, ′′Gabriel, don't play with me."

He replied, ′′ Really, He filled me with kisses!"

The way he told me filled me with a holy craving; As I closed the temple and said goodbye to my parishioners, I approached the altar and laid my cheek on it asking. ′′Lord,  kiss me like Gabriel."