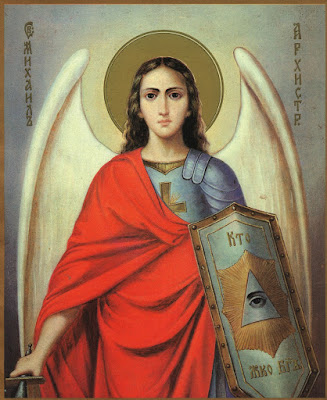 We call on St. Michael the Archangel, “Prince of the Heavenly Host” to protect us from evil. His name is Hebrew for "Who is like God?" which was the battle cry of the good angels when they cast the rebellious Lucifer and his followers into hell.
A story about St. Michael’s powerful intercession was told in a young marine’s letter home to his mother during the Korean War in 1950. It has been circulated ever since.


The Korean War began on June 25 of that year when communist North Korean troops invaded democratic South Korea, storming across the 38th parallel and catching them off guard. The United Nations condemned the invasion and demanded that North Korea  withdraw its forces.
Three days after the invasion, the U.N. Security Council recommended that its members assist South Korea militarily. U.S. President Harry Truman agreed to send American forces. The conflict lasted from June 25, 1950 to July 27, 1953 when military leaders from China, North Korea and the United Nations signed an armistice and created a new boundary giving South Korea some additional territory.
The marine’s letter told of a supernatural encounter with the archangel that saved his life. I personally have no way of verifying the story, but it was reported that in 1951, the letter came to the attention of Father Walter Muldy, a navy chaplain who read it before 5,000 Marines at a San Diego Naval Base. The chaplain had talked to the young man, to his mother, and to the sergeant in charge of the patrol and was convinced of the story’s veracity. 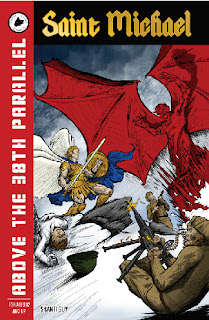 I recently came across the letter creatively illustrated in a comic book (for ages 12 and up) Saint Michael: Above the 38th Parallel keeping the story alive for another generation.
Here is the letter:
Dear Mom,
I am writing to you from a hospital bed. Don’t worry, Mom, I am okay. I was wounded, but the doctor says that I will be up in no time.
But that’s not what I have to tell you, Mom. Something happened to me that I don’t dare tell anyone else for fear of their disbelief. But I have to tell you, the one person I can confide in, though even you may find it hard to believe.
You remember the prayer to Saint Michael that you taught me to pray when I was little: “Michael, Michael of the morning…” Before I left home for Korea, you urged me to remember this prayer before any confrontation with the enemy. But you really didn’t have to remind me, Mom. I have always prayed it, and when I got to Korea, I sometimes said it a couple of times a day while marching or resting.
Well, one day, we were told to move forward to scout for Commies. It was a really cold day. As I was walking along, I perceived another fellow walking beside me, and I looked to see who it was.
He was a big fellow, a Marine about 6’4” and built proportionally. Funny, but I didn’t know him, and I thought I knew everyone in my unit. I was glad to have the company and broke the silence between us:
“Chilly today, isn’t it?” Then I chuckled because suddenly it seemed absurd to talk about the weather when we were advancing to meet the enemy.
He chuckled too, softly. 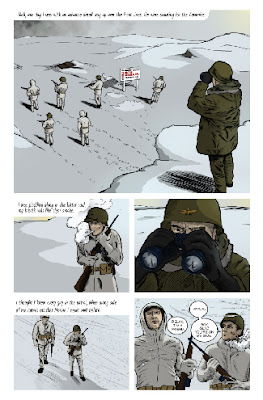 “I thought I knew everyone in my outfit,” I continued, “ but I have never seen you before.”
“No,” he agreed, “I have just joined. The name is Michael.”
“Really?! That’s mine, too.”
“I know,” the Marine said, “Michael, Michael of the morning….”
Mom, I was really surprised that he knew about my prayer, but I had taught  it to many of the other guys, so I supposed that the newcomer must have picked it up from someone else. As a matter of fact, it had gotten around to the extent that some of the fellows were calling me “Saint Michael.”
Then, out of the blue, Michael said, “There’s going to be trouble ahead.”
I wondered how he could know that. I was breathing hard from the march, and my breath hit the cold air like dense clouds of fog. Michael seemed to be in top shape because I couldn’t see his breath at all. Just then, it started to snow heavily, and soon it was so dense I could no longer hear or see the rest of my outfit. I got a little scared and yelled, “Michael!” Then I felt his strong hand on my shoulder and heard his voice in my ear, “It’s going to clear up soon.”
And then, just a short distance ahead of us, like so many dreadful realities, were seven Commies, looking rather comical in their funny hats. But there was nothing funny about them now; their guns were steady and pointed straight in our direction.
“Down, Michael!!” I yelled as I dove for cover. Even as I was hitting the ground, I looked up and saw Michael still standing, as if paralyzed by fear, or so I thought at the time.
Bullets were spurting all over the place, and Mom, there was no way those Commies could have missed at that short distance.
I jumped up to pull him down, and then I was hit. The pain was like a hot fire in my chest, and as I fell, my head swooned and I remember thinking, “I must be dying…” Someone was laying me down, strong arms were holding me and laying me gently on the snow.
Through the daze, I opened my eyes, and the sun seemed to blaze in my eyes. Michael was standing still, and there was a terrible splendor in his face.
Suddenly, he seemed to grow, like the sun, the splendor increasing intensely around him like the wings of an angel.
As I slipped into unconsciousness, I saw that Michael held a sword in his hand, and it flashed like a million lights.
Later on, when I woke up, the rest of the guys came to see me with the sergeant.
“How did you do it, son?” he asked me.
“Where’s Michael?” I asked in reply.
“Michael who?” The sergeant seemed puzzled.
“Michael, the big Marine walking with me, right up to the last moment. I saw him there as I fell.”
“Son,” the sergeant said gravely, “you’re the only Michael in my unit. I hand-picked all you fellows, and there’s only one Michael. You. And son, you weren’t walking with anyone. I was watching you because you were too far off from us, and I was worried.
Now tell me, son,” he repeated, “how did you do it?”
It was the second time he had asked me that, and I found it irritating.
“How did I do what?”
“How did you kill those seven Commies? There wasn’t a single bullet fired from your rifle.”
“What?”
“Come on, son. They were strewn all around you, each one killed by a sword stroke.”
And that, Mom, is the end of my story. It may have been the pain, or the blazing sun, or the chilling cold. I don’t know, Mom, but there is one thing I am sure about. It happened.


For more inspiration check out Patti's latest book: Holy Hacks: Everyday Ways to Live Your Faith & Get to Heaven. Other books include:  Big Hearted: Inspiring Stories from Everyday Families and the best-selling Amazing Grace Series.
Follow Patti at Twitter and Pinterest, like her pages at Holy Hacks, Dear God Books,  Big Hearted Families,  Catholic News & Inspiration on Facebook, and her author Facebook page.  To receive articles in your inbox, you can sign up at the right column. Thanks for stopping by.  God bless you!