Ex-Satanist That Built Basilica, Shows No One Beyond God’s Mercy 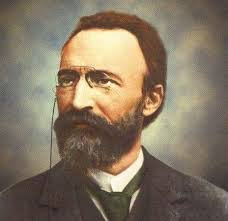 It would seem that being raised by devout Catholic parents who prayed the rosary daily would have pointed to a good and holy future for Bartolo Longo. And it did.  Eventually. First, he strayed so far from God that he became a satanic priest.


Yet, as far as Bartolo strayed—and it was extreme—he was not beyond God’s mercy. When he turned back to God, his conversion was so dramatic that he has been beatified and his writings became St. Pope John Paul’s inspiration for the Luminous mysteries of the rosary.
Bartolo was born on February 10, 1841 in the small town of Latiano, Italy on February 10, 1841.  He was a bright and active child who became unruly at the age of ten after his mother died. When he entered the University of Naples law school, many of his professors were ex-priests preaching against the Church.
Bartolo easily fell under their spell and left the Church. He jumped on the anti-Catholic bandwagon and also convinced others to leave the Church. His spiritual void was filled by attending seances and visiting mediums—something people still do today. (Take note fans of reality show’s Teresa, the Long Island Medium.)
This opened the door to the occult, because mediums are occult. It was a short path from there to outright Satanism. Bartolo gave his soul to the devil and became a consecrated satanic priest and an ardent enemy of the Church. He presided over satanic services and diabolical activities of every sort including performing blasphemous black masses and participating in orgies.
During those dark years, the Longo family stormed heaven for Bartolo. He began to become overwhelmed with extreme depression, paranoia, confusion, and nervousness. One day, when Bartolo felt he was having a breakdown, he heard his dead father beg him to return to God.
Bartolo was visibly a mental and physical wreck. His family got a friend to intervene, Professor Vincenzo Pepe, who taught at a university near Naples. "Do you want to die in an insane asylum and be damned forever?" Pepe asked. He connected Bartolo with a strong support group of educated Catholics. One of them, Dominican priest, Alberto Radente, tutored Bartolo in the Catholic faith, including the writings of St. Thomas Aquinas.
Bartolo publicly renounced his past and returned to the sacraments. On the feast of the Annunciation, March 25, 1871, he became a Third Order of St. Dominic and took the name of Brother Rosario in honor of his new devotion.
As a voluntary penance, Bartolo worked for two years in the Neapolitan Hospital for Incurables. He promoted the rosary, even going to his old haunts and talking with young people. Still, he could not shake the guilt or feel worthy of salvation.
One evening in Pompeii, as he walked near the chapel, Bartolo had a mystical experience which he wrote about later: “As I pondered over my condition, I experienced a deep sense of despair and almost committed suicide. Then I heard an echo in my ear of the voice of Friar Alberto repeating the words of the Blessed Virgin Mary: ‘If you seek salvation, promulgate the Rosary. This is Mary's own promise.’”
Bartolo fell to his knees and promised to spend the rest of his life promoting the rosary and living out its Gospel messages, beginning in Pompeii. He built Pompeii’s famous Basilica of Our Lady of the Most Holy Rosary with the financial support of the Countess.  Bartolo and his wife began the Confraternity of the Rosary. He had an old picture restored to place in the church where the rosary would be prayed and many miracles were reported.
He also founded orphanages, technical and elementary schools, and orphanages, and wrote novenas, prayer manuals and books on the Rosary. Saint Pope John Paul II found inspiration in Bartolo’s writings for the Luminous mysteries of the rosary continued to promote the Rosary until his death on October 5, 1926, at the age of 85. Pope St. John Paul II beatified the "Apostle of the Rosary” on October 26, 1980 with more than 30,000 people in attendance.
“Rosary in hand, Blessed Bartolo Longo says to each of us: 'Awaken your confidence in the Most Blessed Virgin of the Rosary. Venerable Holy Mother, in You I rest all my troubles, all my trust and all my hope!'” – St. Pope John Paul II at Blessed Bartholomew Longo’s beatification ceremony.
~~~~~~