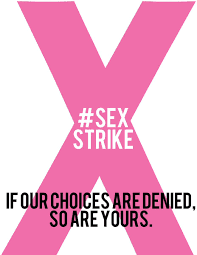 Wait a minute, I thought the #MeToo movement made it clear that it's not okay for men to pressure women for sex in exchange for giving the women what they want? But it's okay for women to use sex to get what they want?  Actress Alyssa Milano thinks so.

On Friday, the 46-year-old abortion activist tweeted: “Our reproductive rights are being erased. Until women have legal control over our own bodies, we just cannot risk pregnancy. JOIN ME by not having sex until we get bodily autonomy back. I’m calling for a #SexStrike. Pass it on."
This is all part of Milano’s tantrum over the state of Georgia outlawing abortion of babies with beating hearts. Calling on Hollywood to boycott Georgia as a movie-making destination was not enough for her. She is now calling on her followers to stop having sex to protest anti-abortion laws until things change and they can be sure of  killing any babies resulting from sex.
It seems that #MeToo and #SexStrike are pretty darn close to the same thing. The situations take place under different scenarios but in both cases, sex is used to pressure or barter and not as an expression of love connected to responsibility.

People are laughing and applauding despite confused motive.
Sohrab Ahmari@SohrabAhmari
A #SexStrikegoes some way toward rediscovering traditional sexual morality. Just don’t call it “continence” or “chastity,” lest the liberals wise up to the fact that they’re promoting what their enemies have been preaching for, oh, 3,000 years or so
Graham Allen‏ @GrahamAllen_1
So, @Alyssa_Milano wantswomen to withhold sex from men so they will be ok with them murdering babies?! It’s a bold strategy Cotton let’s see how that works out for them! LOL 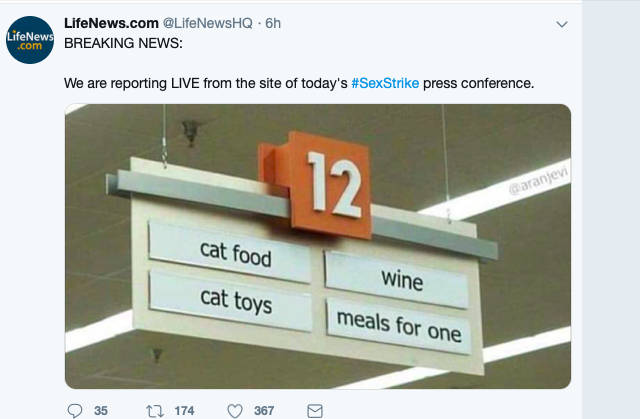 Lila Rose@LilaGraceRose
Reproductive Responsibilities: • Treat others with dignity & stand up against sex harassment & abuse • Abstain from sex until you’ve chosen one person to love, protect & serve for life who also chooses you • Be open to the lives you may create together 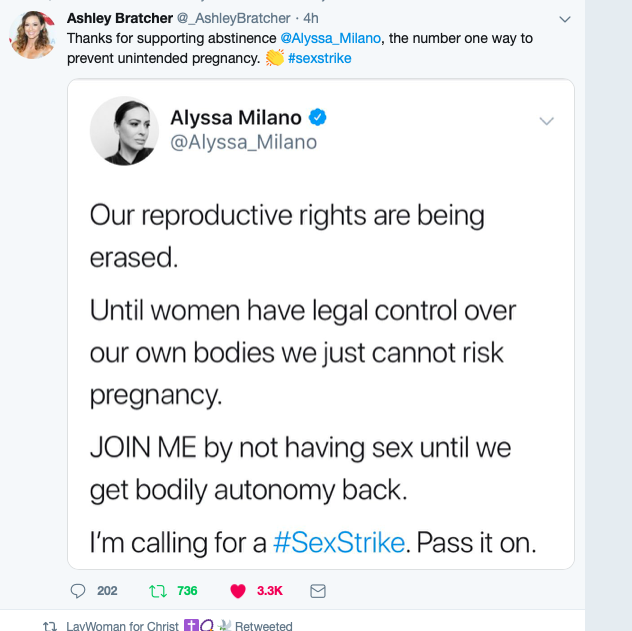 ‏ThePersistence
@ScottPresler
Liberal women having a #SexStrike means conservative women will be having more babies. I fully support this pro-life cause.

o one of consequence‏ @hottesque
You know what's super dumb about #SexStrike? 1- it's a mockery of strikes and labor unions in general 2- it makes it sound like sex is a place of control and power struggle, which it shouldn't be

Candace Owens‏ @RealCandaceO
From an evolutionary perspective, the radical feminist #sexstrike has the potential to save America. Yes, ladies—leave the terrible bondage of procreation to us horrible conservatives. Consider me a dear ally, friend and mentor on your commitment to abstinence.

UnplannedMovie‏ @UnplannedMovie
JOIN US in applauding @Alyssa Milano. What do you think? Her #sexstrike actually treats preborn lives with respect. Sex does result in new human beings. Self-respect & respect for the preborn people's lives probably includes abstinence in a world that exterminates the #UnPlanned.

Saladino for Congress‏ @JoeySalads
Alyssa Milano made Women realize they can avoid unwanted pregnancies by simply not having sex.


Allie Beth Stuckey‏ @conservmillen
First time I’ve ever seen a pro-choicer advocate for personal responsibility. Kudos! If y’all have a rally LMK I’ll be there

There were plenty of abortion advocates who also did not go along with Milano. Here is just one: @emrazz. "Please stop feeding the narrative that women are providers and men are consumers of sex. Bribing men for equal rights with access to our bodies is not how feminism works."

Under Milano’s plan, men won’t get sex until they can insure the power to kill babies with beating hearts. And then? They get sex?  What kind of men are we talking about here? A picture of Milano is emerging, revealing that she does not know what sex is for and does not know that real men have far more integrity than she imagines.

Milano has fallen into her own trap. Let us pray that she can emerge from the other snares that have also pulled her under.   St. Michael the Archangel…
~~~~~~~~
For more inspiration check out Patti's latest book: Holy Hacks: Everyday Ways to Live Your Faith & Get to Heaven. Other books include:  Big Hearted: Inspiring Stories from Everyday Families and the best-selling Amazing Grace Series. Follow Patti at Twitter and Pinterest, like her pages at Holy Hacks, Dear God Books,  Big Hearted Families,  Catholic News & Inspiration on Facebook, and her author Facebook page.  Sign up at the right column to receive articles in your inbox.  God bless you!