Miraculous Image of Our Lady of Lajas in a Cave 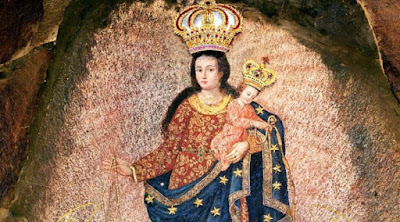 
Our Lady holds the child Jesus in her arms. St. Francis is to her right and St. Dominic to the right. Jesus is handing the Franciscan cord to St. Francis and the Blessed Mother is giving a rosary to St. Dominic. It was the Franciscans and Dominicans that first evangelized Columbia.
Maria Mueces and her young, deaf-mute daughter, Rosa, often walked the six miles between their village of Potosito Ipiales, a neighboring village. One day, they were caught in a storm in a part of the river valley that passed through a deep gorge of the Guaitara River known as Las Lajas (the Rocks). Although Maria was superstitiously afraid of the cave, they stepped into it briefly to get out of the rain. She felt a presence and ran out. The next time they passed the cave, the little girl ran into it and called out that there was a woman with a little boy in her arms. This was astounding because Rosa was mute and had never spoken before.
The mother saw nothing but grabbed her daughter and continued onto Ipiales.     Everyone was amazing that Rosa could not speak.  A few days later Rosa disappeared from home. After unsuccessfully searching everywhere, Maria thought of the cave. Rosa had often told her mother that the lady was calling to her. Maria found her daughter there playing with a child before his mother. She fell to her knees, realizing it was the Blessed Mother and Jesus.
Rather than risk ridicule, Maria kept the event to herself. However, for several months, she and Rosa often visited the cave, bringing wild flowers and candles, placing them in cracks in the walls. One day, Rosa became very ill and soon died.  Maria carried her daughter to the cave and pleaded for Our Lady to intercede to her Son for Rosa’s life. The little girl came back to life.
Maria returned home and told everyone the whole story. They were amazed and went to see the cave for themselves. On the wall of the cave, they saw the image of Our Lady of Las Lajas. Maria had never seen it there before.

Word spread quickly and pilgrims soon came. According to the Miracle Hunter, Fray Juan de Santa Gertrudis's wrote of his journey through the southern region of the New Kingdom of Granada between 1756 and 1764. “Without the benefit of sight, Fray Juan traveled through cities, fields and villages blind and on foot from Ecuador to Narino, Colombia begging people for money to build the Las Lajas 19th century chapel. At the completion of the chapel, Fray Juan miraculously regained his vision as a result of his deep faith in the Virgin Mary of Las Lajas.”
From January 1, 1916 to August 20, 1949, a large Gothic church was built over the cave, replacing a nineteenth-century chapel. The Catholic Church authorized the cult of Nuestra Señora de Las Lajas Virgin in 1951 and in 1954, the sanctuary was declared a minor basilica.
But how did this beautiful image get into the cave in the first place? There are no brush strokes or any sort of pigment on the surface of the rock. Geologists from Germany bored samples from several spots in the image. The colors are the colors of the rock itself for several feet down. It seems the only possible explanation is that God himself placed that image in the cave.
Many of God’s miracles are easy to miss if you don’t really want to see them. Visions and miracles, even when they leave behind evidence are discounted by unbelievers. A common argument is: “If God performs miracles, why hasn’t he ever replaced an amputated limb?" They ignore such things as incorrupt bodies, Eucharistic miracles, the Shroud of Turin, image of Our Lady of Guadalupe, miraculous healings, and the existence of the universe and all of life from nothing. Supposedly, a new limb would get them to say, “Okay, you’ve got me there.”  Except, it would need to be a repeatable miracle in their lifetime and in their neighborhood lest they say, “Yeah, right. And the flying spaghetti monster created the universe.”
God does not perform on demand. The devil learned that in the desert when he challenged Jesus: "If you are the Son of God, tell these stones to become bread." Thehigh priests and King Herod learned the same lesson when they asked Jesus to demonstrate he was the Son of God in order to spare his life. He had already healed the sick, given sight to the blind and hearing to the deaf, raised the dead, and turned water into wine, so unbelief was their choice.
Giving us an image in a remote cave that became revealed to the world is God’s way.  His gifts abound, are often unexpected, and given freely, but never produced on demand.
We walk by faith, not by sight, but if we open our hearts, there is plenty to see.
~~~~~~~~