Grow Closer to the Blessed Mother Through Her Many Titles 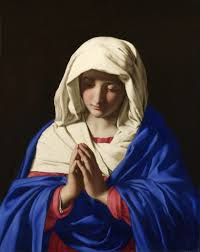 In the Bible, the mother of our Savior Jesus Christ is called Mary and we are told all generations shall call her blessed (Luke 1:48). And so, we do. The Blessed Mother is an endearing name throughout the Christian and even Muslim world.
(Note: Mary is mentioned in the Koran even more times than in the Bible. Muslims believe the Virgin Mary was the mother of a great prophet, not, the Son of God, however, they hold her in highest regard.)


Besides the names Virgin Mary and Blessed Mother, she is known by titles such as Our Lady of Fatima, Our Lady Queen of the Angels, Mystical Rose, and many more.  At times, some children and non-Catholics have thought that the titles actually belonged to different people rather than being different names that associate the Blessed Mother with events or special qualities.  But why does Our Blessed Mother have so many names?
The answers are remarkable and offer insights and opportunities to grow deeper in a relationship with the beloved mother of Jesus.  In the book,  A Sky Full of Stars, author Joby Provido explains that for us to know Mary better, the Church has given her many titles over the years.  “Some of these are easily understandable,” he said, “but some are concealed under layers of language and cultural evolution with titles such as Mystical Rose, Tower of David, Tower of Ivory, House of Gold, and Morning Star.”
In its proper perspective, understanding the names helps us to meet “the bride of the Holy Spirit,” Provido explained.  Here is an explanation that he gives for Mary as the Morning Star.

Christians have always used celestial objects to symbolize what we believe. God, for example, always symbolized by light. In the Old Testament, God appeared to Moses in the form of a burning bush. He manifested himself as a lit torch and lamp when he made a covenant with Abraham. He appeared as a pillar of fire that escorted the Israelites to the Promised Land. So, when Jesus said, “I am the light of the world,” the apostles instantly recognized it pointing to his divinity. This is why the sun is a symbol of Christ. The sun is a star who continually gives until it dies the same way Christ’s emptied himself until death. The sun as a symbol for Christ also ties up beautifully with Ezekiel's prophecy that the Messiah will come from the east because the sun rises in the east. That is why older churches had altars facing east. That is why catechumens faced east on Easter during their baptism.

When we say Mary is the Morning Star, we are referring to Venus that rises just before the sun does. It is a way of reminding us that God planned to undo Adam and Eve’s disobedience and its terrible effects. Tertullian said that since Eve came from Adam, it is only poetic that in this reversal, the new Adam should come from the New Eve. 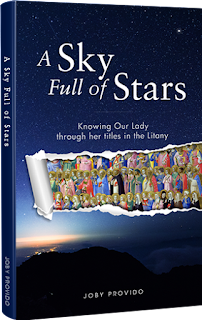 In his book, Provido explained that God planned our salvation with Mary as a crucial part of it. “It was meticulously designed so that Mary had to enter into this world first so that she could bring Christ into it too,” he writes. “This means Mary was not a random product of evolution arbitrarily chosen by God, but specifically selected and fashioned even before the universe was created.” The front cover of his book represents this title with a picture of a dawn sky where the sun is just about to break the horizon, and the morning star, on the upper right, heralds its arrival.

An example of another title is Mary, Refuge of Sinners.

In the Old Testament, God commanded Moses to create Levitical cities, six of which were “cities of refuge.” They were called that because the law could not punish criminals and murderers within the city walls. When the high priest died, a great amnesty was given so criminals in these cities could go home without being harmed along the way. This, of course, is a prefiguration of Christ. In his kingdom, we who deserve death are spared. Upon his death, we are able to make our way our way back to our true home in heaven unharmed.

Since Mary reflects her son as in a spotless mirror (which is another title, “Mirror of Justice”), she is our Refuge of Sinners. This means that when we are threatened, we can nestle safely under her cloak the same way chicks feel secure under their mother’s wings that put them out of harm’s way. 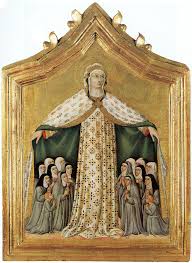 A common imagery associated with the Blessed Mother is the protection of her mantle. Provido writes that this image is rooted in the thirteenth century, when a Cistercian monk had a heavenly vision of Mary surrounded by many monks.

He felt sad because he didn’t see any monks of his order. He asked Our Lady why his religious order was not there considering their great devotion to her. She answered, “I love my Cistercians so much that I keep them covered with my arms.” She opened her mantle, and he saw under it many Cistercian monks.

This story became so popular in Europe that artists drew her cloak wider and wider so that more and more people could fit under it. Eventually, the only way to fit the entire world under her mantle of protection was to make the sky her mantle…. The miraculous image of Our Lady of Guadalupe seems to corroborate this notion when Mary appeared wearing a blue cloak bedeckedwith stars.

A Sky Full of Stars uses Scripture, tradition, liturgy, and typology to explain Mary’s titles.  By knowing Mary through her many names, Provido tells us to be prepared “to fall in love with her all over again.”
To order in paperback or Kindle go here.  For more information on A Sky Full of Stars, check out the official website.
~~~~~~~~