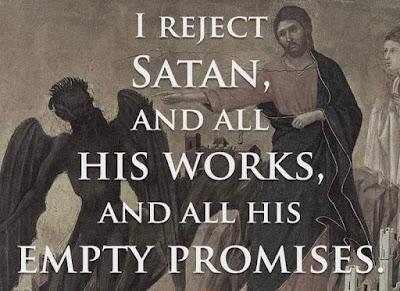 Is the devil stronger in the world today?  “No,” according to an exorcist I once interviewed. “There’s just more people willing to play his game.”  The devil has always been about his business of tempting us, but in the days when more people went to church on Sundays and prayed every day—even public schools use to start the day with prayer—people availed themselves more to God’s protection.


Spending time with God reaps benefits.  We talk with him, ask him to help us, and we see with clearer vision. Jesus is the light, so the closer to him we are, the better our spiritual sight to recognize evil.
It is the difference in vision causing such divisiveness in our world.  In the book Unbound: A Practical Guide to Deliverance, author Neal Lorenzo explains that when people are influenced by the devil, they think the wrong people are the enemy. That explains how the Knights of Columbus are being viewed as a dangerous fringe group by some now; why good, respectable people who believe marriage is between a man a woman are called bigots and lose jobs; and people working to defend the unborn and help mothers have their babies, are attacked as anti-women. 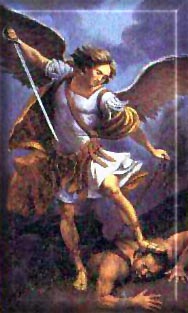 Seeing with a clear vision is important in spiritual warfare so that you understand who is actually on God’s side. Keep in mind, there are pseudo-Christian pastors blessing abortion clinics and preaching a very different Gospel than what Jesus taught.
To see clearly and be protected, the first step is staying in the sacraments. That means going to Mass and Confession. The exorcist quoted above, Father Vincent Lampert of the archdiocese of Indianapolis, has told me that if we are doing that, the devil is already on the run.
Confession is Spiritual Armor
Msgr. John Esseff, a priest in the diocese of Scranton, Pennsylvania for 66 years and an exorcist for over 40 years, has told me that the sacrament of confession is worth more than 100 exorcisms; one imparts sacramental grace and the other is a blessing to move a person back to the sacraments.
“When confession lines grow short, demonic activity increases,” he said. “Since Vatican II, with the decline in the Sacrament of Reconciliation, we’ve seen not just an increase in abortion but also in personal sin which is the primary work of the devil,” Msgr. Esseff said. “This has been true all over the world where the Church has declined.”
We need a personal awareness of sin because sin is the greatest evil, he said. “Sin is a far greater evil than the devil,” Msgr. Esseff said. “The devil is outside of us. Even in a possession, he cannot possess the soul.” According to him, the work of Satan as we are told in the Our Father, is temptation. “Even though we’ve been redeemed with the union that we have with Christ, sin robs us of the greatest gift that we have which is grace. We have a capacity to live like Jesus, who told us, ‘What I have done, you will do and even greater.’”
Msgr. Esseff explained that we separate ourselves from Jesus through our sin which is why we confess at the beginning of every Mass through praying the Confiteor: “I confess to almighty God and to you, my brothers and sisters, that I have greatly sinned…”
A sacramental life and a strong prayer life goes a long way to protect us from evil and is our most important step. From there, fasting and almsgiving which the New Testament assumes will be done by Christians, should be part of our walk with Jesus Christ.  He is the one who drives out the devil.

Prayers for Protection
No one should be in fear of the devil, but rather fear sin and stay close to Jesus who is the true power.  Asking for the Blessed Mother’s protection and intercession (such as the Hail Mary and the Rosary) also helps to keep us safe from harm.
As reported in CNA (Catholic News Agency), Italian priest Sante Babolin said the Blessed Virgin Mary is a powerful advocate for him during exorcisms. “In my experience – so far I have performed 2,300 rites of exorcism – I can say that the invocation of the Most Holy Virgin Mary often provokes significant reactions in the person being exorcized.”
Also, two good prayers for protection are the St. Michael prayer and St. Patrick Breastplate prayer. The St. Patrick prayer was recommended to me by Msgr. Esseff as offering very powerful protection, which I have found to be the case.  He recommended it to me once when it seemed that an article I wrote had brought on some spiritual backlash. Coincidentally, at that time, someone I did not even know, came up to me at a conference and gave me a prayer card with the St. Patrick prayer on it.   I try to say it daily now.
~~~~~~~~
For more inspiration check out Patti's latest book: Holy Hacks: Everyday Ways to Live Your Faith & Get to Heaven. Other books include:  Big Hearted: Inspiring Stories from Everyday Families and the best-selling Amazing Grace Series.
Follow Patti at Twitter and Pinterest, like her pages at Holy Hacks, Dear God Books,  Big Hearted Families,  Catholic News & Inspiration on Facebook, and her author Facebook page.  To receive articles in your inbox, sign up at the right column. Thanks for stopping by.  God bless you!