Haunted Tourism Can Leave You With Unwanted Souvenirs 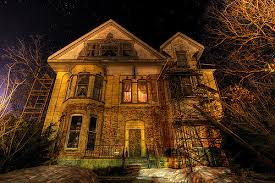 Haunted tourism is an adventure that sometimes brings lingering, unwanted souvenirs.
People are fascinated by the supernatural which includes both heaven and hell. While some people set their itineraries on pilgrimages to holy lands and heavenly apparition sites, others prefer hair-raising haunted destinations.


An example of the heavenly are the sites where Eucharistic miracles occurred such as Lanciano, Italy. That is where in the eighth century, a priest experiencing doubts saw the bread and wine transform into real human flesh and blood during the consecration of the Mass. The flesh is still preserved to this day. In 1971, an independent scientific analysis identified the flesh as cardiac tissue and the blood which appeared fresh rather than 1200 years old, showed not a trace of preservatives.
On the dark side are destinations steeped in the occult or violence. An example is the medieval castle, Chateau de Chateaubriant in France, where legend has it that a wife was murdered by her jealous husband in 1537. It is claimed that a pool of blood appears in the room of the murder every year—the blood of a murdered woman versus the blood of Christ.

Museum Waiver for Demonic Attachments
Although we do well by avoiding evil, exorcists regularly are called upon to help people who have done just the opposite. Father Benedict (not his real name) is a Catholic pastor who has served as a diocesan exorcist for ten years.
He described the trend to visit haunted places as foolish and potentially harmful which he has witnessed. “There’s a horror museum in Las Vegas full of objects from haunted houses and things used in satanic rituals,” Father Benedict explained.  “Two people contacted me about it, because they had effects from going there.”
Before entering the museum, visitors must sign a waiver that they will not hold the museum accountable for anything that happens afterwards. Father Benedict explained that when someone has an unconfessed mortal sin on their soul, a demon or a disembodied soul, can attach themselves.
“I had one man come to see me who had opened a lot of doors to evil before he got married,” he said. “When he went to the museum and came back home, he got sick and there was phenomena in his house of noises and other unexplained occurrences. I severed all of the ties between him and the demons and went to his house and exercised it.  A week later guy from the Midwest called who had gone to the same museum and was having the same experiences. I sent him to an exorcist in his area.”
Once, a person told Father Benedict he had gone to a New Age gift shop. Father told him to get rid of any of his purchases. The person broke a porcelain fairy and then brought it to the priest to show him the horror he discovered within.  “Inside the broken fairy was a satanic altar with the statue of a headless priest with the body and the head glued to this altar,” Father Benedict said. “Clearly it was satanic, and obviously very pre-meditated. I was stunned.”

Disembodied Souls
Referring to hotels that claim to be haunted, Father Benedict said: “It is absolutely reprehensible to make money off of a soul that is unable to be liberated and go to the light,” he said. “It’s horrible. I find it sinful.”
He explained that in such situations, a ghost is very different from a demon. He cautioned people never to put themselves in a situation where they communicate with such spirits. “You don’t want to become a medium or practice necromancy, which can happen if you become too curious,” he said. “And you don’t know if there is a demon somehow manipulating that soul.” [Necromancy involves communication with the dead often for the purpose of divination, imparting the means to foretell future events or discover hidden knowledge.]
A disembodied soul, according to Father Benedict, is a soul that has not gone for judgement yet.  “What happens when they go to the light—to God—is up to God,” he said.  “I assume most people go to purgatory.”
Note: there is no definitive Catholic teaching on disembodied souls and there is disagreement among exorcists. Some say there is no such thing.  “I disagree because they act very differently,” Father Benedict said.  According to him, one simply makes their presence known compared to the other connected to evil.
The Church teaches that everyone has a body and soul and that they become separated at death, but it does not specifically teach on disembodied spirits. It is settled, however, that people should not go looking for such encounters.
The Catechism of the Catholic Catechism, (2116 and 2117) says that “all forms of divination are to be rejected” which includes “recourse to Satan or demons, conjuring up the dead, or other practices supposed to ‘unveil’ the future, contradicts the honor, respect, and loving fear that we owe to God alone.”
That does not mean that we night not be in a position to witness spirits. Padre Pio and other saints claimed to be visited by souls in purgatory in need of prayers.  Father Benedict advises: Do not communicate with them but pray for their souls. Having Masses said for them is also very beneficial.

Stay Close to God
Father Benedict also warned against opening portals to the demonic by engaging in pagan New Age practices and the occult which includes horoscopes. Anything that relies on a power that is not God risks opening oneself to the devil, as he sees more and more frequently. “It’s reckless,” he said. “You can be killed by getting involved with this. People think it’s made up and it’s not.”
When he began serving as an exorcist, Father Benedict said around fifty percent of people who came to him were truly experiencing some sort of demonic presence—anything from possession—which is rare—to infestation of a place, or some sort of a physical or mental demonic harassment. Now, it is up to ninety-percent.
“The more common evil becomes,” Father Benedict said, “the more we let our guard down and people start to ignore it.” He noted that there are many celebrities who promote New Age beliefs and contact mediums. “None of these spirits are from God,” he said.  “Their purpose is to take as many of God’s children to eternal damnation as they can.” 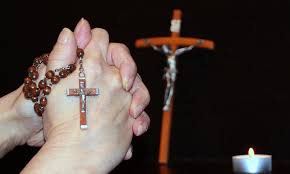 Instead, he implores people to develop a strong relationship with Jesus Christ, live a moral and a sacramental life, and stay away from evil—never treating it as fun, or a way to increase personal power.
“We have to put ourselves at the disposal of God,” he said. “Also, turn to the Blessed Mother who was first disciple to say ‘yes’ to Jesus.  Demons hate the Blessed Mother.”
~~~~~~~~
For more inspiration check out Patti's latest book: Holy Hacks: Everyday Ways to Live Your Faith & Get to Heaven. Other books include:  Big Hearted: Inspiring Stories from Everyday Families and the best-selling Amazing Grace Series.
Follow Patti at Twitter and Pinterest, like her pages at Holy Hacks, Dear God Books,  Big Hearted Families,  Catholic News & Inspiration on Facebook, and her author Facebook page.  To receive articles in your inbox, sign up at the right column. Thanks for stopping by.  God bless you!