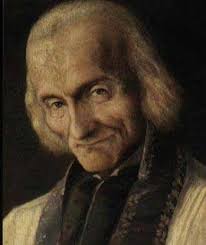 August 15, 2018
Dear Wounded Fathers,
On this brokenhearted day, your minds should turn to Ars, that small and despairing French town. The response to this swallowing red-tide of Church evil can be found in there. There, in the secret of its wavy countryside, your comeback lay.

Before Jesus ascended to heaven, he asked his apostles to become martyrs, which 11 did. The Greek origin of the word “witness” is “martyr.” In the Acts of the Apostles, Jesus spoke his final words to his first priests: “You will receive power when the Holy Spirit has come upon you; and you shall be my witnesses … even to the remotest parts of the earth.”
He was requesting they die so others might live. And each knew it right then. This command to die was one the priest-saints didn’t dare stray from, even in their most fragile state. They prayed over it, wept because of it, cultivated it deep within themselves, and stood up again and again to become mortified.
“Unless the hands of the priest are scarred hands, Christ’s mercies do not so readily pass through them,” Archbishop Fulton Sheen said. “Blessings, power, healing, and influence get clogged. … no priest begets a vocation or makes a convert or sanctifies a soul except under the shadow of the cross.”
Vianney and the collared heroes of the past knew priestly physicality and suffering, uncommon holiness and a constant contemplation of the divine created a heroism that Satan simply could not overcome. Satan went back to hell a perennial loser after spending time around these guys.
Without Satan bumping around, perhaps that’s what helped ugly little Ars to become the holiest town in the world.
Lastly, Father, here’s something I noticed in reading about Vianney: it seemed the divine detail that rested deep within his him was this: I must die so others might live. He knew his parishioners were caught up in a war until the end of time. Satan wanted those souls under his care. So did God. And Vianney knew a bachelorhood-type of priesthood wasn’t going to cut it. He knew it was pathetic ammunition to defeat Satan.

I’ll pray, Father, that you beat Satan back now.
Be Vianney. Be the Cure.

Beneath her mantle,
Kevin Wells kvnjwlls@gmail.com

Kevin Wells is a Catholic evangelist, writer and author of Burst: A Story of God’s Grace When Life Falls Apart (Servant). The Archdiocese of Washington named him its James Cardinal Hickey National Figure Award winner for his work in evangelization and youth. He’s proudest of being President of the Monsignor Thomas Wells Society, a long-running organization that honors his martyred uncle as it financially and prayerfully supports seminarians and priests. Kevin is a former sports writer and Major League Baseball writer who lives in Millersville, Maryland with his wife and three children.
~~~~~~~~
Posted by Patti Maguire Armstrong