Letter to Georgetown President: You Have Been Entrusted with Much 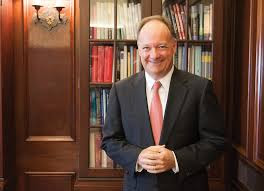 By writing to the Georgetown president who publicly honored a rabid pro-abortion US senator and also by praying for him, I desire to perform a spiritual work of mercy. I encourage everyone to be bold, be prayerful, and to love much—both God and neighbor—as you shine your Catholic light before all.

You have been given much, President DeGioia. The unborn have nothing except immortal souls and those who should be looking out for them.

Georgetown is often made fun of as the least Catholic of all Catholic colleges and even anti-Catholic as it would seem to be the case by your honoring Senator Dick Durbin. He has voted to expand research to more embryonic stem cell lines, voted against making it a crime to harm an unborn child during a crime, voted against banning the grisly procedure known as partial birth abortions and against banning human cloning. He is banned by his own Bishop Thomas Paprocki from receiving Communion for voting against the Pain-Capable Unborn Child Protection Act which prohibited abortion at 20 weeks.

Yet, you presented Durbin with the Timothy S. Healy, S.J. Award for devoting “his life to the core Jesuit value of service to others.” I strive to live a life of service was once a Jesuit volunteer and served on the Flathead Indian Reservation in Montana in 1984-85.  To claim a life of service to God while ignoring the slaughter of innocents is a mockery. And then to honor and elevate a man at the helm of this slaughter is unconscionable.

By leading other Catholics astray it would be better to have a millstone around your neck. You are in a position of leadership and influence but have chosen badly.  I  pray that you have a change of heart and seek ye first the Kingdom of God, of which the unborn are a part.

May God have mercy on you and bless you,

~~~~~~~~
For more inspiration check out Patti's latest book: Holy Hacks: Everyday Ways to Live Your Faith & Get to Heaven. Other books include:  Big Hearted: Inspiring Stories from Everyday Families and the best-selling Amazing Grace Series.
Follow Patti at Twitter and Pinterest, like her pages at Holy Hacks, Dear God Books,  Big Hearted Families,  Catholic News & Inspiration on Facebook, and her author Facebook page.  To receive articles in your inbox, sign up at the right column. Thanks for stopping by.  God bless you!
Posted by Patti Maguire Armstrong