New Year’s Resolution: Get Out of the Boat! 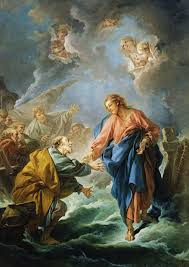 Is your New Year’s Resolution ready to employ?  If not, I have one for you: Get out of the boat this year.
Start each day reporting for duty, offering to do whatever God has in mind and asking for the grace to be like St. Peter and get out of the boat. Only then, was he able to walk on water.
Under the scenario of desiring to do whatever God wills, there can be no failure.  We control our effort and God controls the outcome.

The key is not to chicken out and ignore God’s prodding.  He does not call the equipped, he equips those he calls.
“You miss 100 percent of the shots you never take.” —Wayne Gretzky
Don’t be surprised if there are moments of hesitation or wondering if you should really do what you think God is asking of you.  Jeff Cavins, my co-author in the Amazing Grace Series, (along with Matthew Pinto) calls it getting out of the boat.  He shared a story of God prodding him one day to tell a customer at the gas station where he worked, that Jesus loves him.  But Jeff did not want to do that.
“I didn’t want the guy to think I was a weirdo,” he said. But as Jeff watched the man in his business suit put gas into his car, the feeling grew stronger.
Jeff considered that St. Peter the apostle had asked, “Is that you Lord?” when he saw Jesus walking on the water on the Sea of Galilee.  But Peter had to get out of the boat to find out if it really was Jesus.
“Is that you, Lord?” Jeff wondered as the feeling persisted. He did not want to be disobedient.
“Hi,” Jeff said when the man came in to pay for his gas.  Then Jeff took a deep breath and decided to get out of the boat. “Jesus loves you,” he added, trying to make it sound as casual as How’s it going?
An angry expression and a tightened fist led Jeff to fear he might get punched in the face.  Instead, the man pounded the counter.
“What is going on?” the man asked. “You are the third person who has told me that this morning?”  The man admitted that he used to walk with the Lord but no longer did. The three messages in a row, had given him pause.  Jeff’s obedience to God’s prodding gave the customer something serious to think about.
God’s assignments include the grace to accomplish them.  It is not about us, it is about him.  When St. Margaret Mary was given the vision of the Sacred Heart of Jesus and asked to make the devotion known, she asked, “Why me, I’m so lowly?”
Jesus responded, “If I could have found someone lowlier than you, I would have.”


With that in mind, lowliness is not a hindrance but an asset.  God works well with people who depend on Him rather than themselves. We see that clearly in the lives of the saints. We just need to do our part and put on our life vest by padding our day with prayer, living a sacramental life, and including the Bible as part of our life so we stay close enough to God to hear him clearly.  With such safety measures, we need not worry about stepping out of the boat in faith.
~~~~~~~~~