Black Elk Cause for Canonization Opened 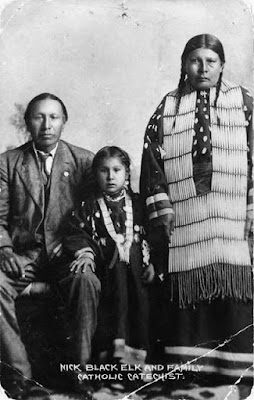 Nicholas Black Elk, a former Lakota medicine man from South Dakota, is on the path of sainthood.  The Mass, which opened his cause for canonization, was celebrated by Bishop Robert Gruss on October 21 at Holy Rosary Church near Pine Ridge, S.D.  During his homily, Bishop Gruss said that Black Elk was open to the Spirit of God in his life from a very young age. “God used a personal invitation from a Jesuit priest to lead this child of God, Black Elk, down a new path to becoming this great disciple in the Catholic faith for the Lakota people,” he said.


He was born sometime between 1858 and 1866 and was known as a great medicine man. Two early biographies of Black Elk ignore that the last 50 years of his life, he was Catholic. In Black Elk: Holy Man of Oglala, author Michael Steltenkamp explained that Black Elk’s life in the 20th century as a Catholic was quite different from his life as a Sioux warrior and holy man in the 19th century.
His daughter Lucy Looks Twice said that her father became a Catholic missionary who had traveled with the Jesuits to help convert the tribes of Arapahoes, Winnebagos, Omahas and others. One missionary estimated that Black Elk was responsible for around four hundred converts.
According to Lucy, her father embraced his new Catholic faith, and that is what ultimately brought him great respect among his people. “I learned to my great astonishment that Black Elk’s prestige in the reservation community was not attributable to the popularity from his two books,” Steltenkamp wrote. “Prestige he had, but it was the result of his very active involvement with priests in establishing Catholicism among his people
Black Elk considered his conversion a part of his search for God. The former warrior did not pine away for the past, but embraced the new world around him.  He actually traveled in the eastern U.S. and even Europe, joining Buffalo Bill Cody’s Wild West Show in 1886 and even entertaining Queen Victoria. His reputation as a Sioux holy man was used to attract crowds. Black Elk was also a second cousin to Crazy Horse and had been present during George Armstrong Custer’s last stand at the Battle of the Little Bighorn.
His first wife was Catholic had their three children baptized.  He also became Catholic after she died in 1904.  When he remarried, his second wife and children were all baptized. Black Elk became a catechist in 1907. He died on August 19, 1950.
At the Mass to open his cause, Bishop Gruss said Black Elk had helped others to live in balance as both Lakotas and Catholics. “He melded whatever he could from his Lakota culture into his Christian life,” he said. “He challenged people to renew themselves, to seek this life that Christ offers them.”
Go here and here for more information about Black Elk.