Witchcraft is Not Pretty 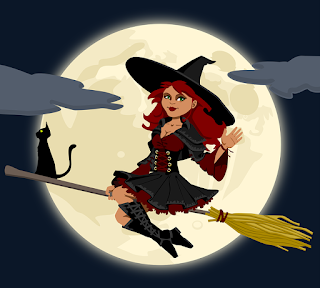 Witchcraft is trending in plague-like fashion, spreading a deadly contaminant to the soul. At least with small pox or the Ebola virus, people have the sense to cordon it off and seek annihilation.
“Do not be afraid of those who kill the body but cannot kill the soul. Rather, be afraid of the one who can destroy both soul and body in hell,” (Matt 10:28).
“Be not afraid," is good advice when you give God control. Otherwise be afraid.

Since reports of celebrities indulging in the occult have become rampant, so too should be prayers and warnings against it. It's not cute or harmless even if it has become stylish. Too many people look up to celebrities because they can sing or act or wear clothing well. We should be more discerning and pity those poor stars that have fallen from grace.
Just recently, singer Lana Del Ray confirmed in an interview that she loves the occult and attempted to cast a spell on Donald Trump last February.  At that time, exorcists warned against playing with such fire.
Del Ray said:  “I’m in line with Yoko [Ono] and John [Lennon] and the belief that there’s a power to the vibration of a thought. Your thoughts are very powerful things and they become words, and words become actions, and actions lead to physical charges.”
Certainly words and thoughts are powerful things. So why then, call on the devil? Nothing good ever comes of that.
This recent article explains that the devil is a stalker. Once you start a relationship with him, he does not leave of his own accord. After all, accessing the devil’s power leaves one indebted to him. And if friendship with the devil is such that giving him the cold shoulder is to no avail, an exorcist and/or deliverance team may need to be called in. However, that should not be the first response since the Catholic Church offers an arsenal of spiritual weapons with which to do battle such as the sacraments, prayer, the rosary, adoration, and sacramentals.

The Power of Spells
Spells can have power, according to Father Vincent Lampert, the designated exorcist for the archdiocese of Indianapolis since 2005. “I think there’s power, but it’s not coming from God,” he said. “Anyone who would dare say they want to challenge God, should realize that we can’t use the devil; the devil uses us. People can’t control it and the devil ends up using them for his own purposes.”
Spells, according to Father Lampert, only have an effect in people who are spiritually weak. If we are anchored in God, he said Scripture tells us we have nothing to fear. “Put on the whole armor of God, that you may be able to stand against the wiles of the devil. For we do not wrestle against flesh and blood, but against principalities, against powers, against the rulers of the darkness of this age, against spiritual hosts of wickedness in the heavenly places,” (Ephesians 6:10-18).

The Solution
“You can’t stop someone from placing a curse, but as a Christian, if you are you praying to God and going to him, the curse will have no power,” Father Lampert said. For Catholics, he said going to Mass, receiving the Eucharist and going to Confession, is strong protection against evil. “Curses are effective when people are weak,” Father Lampert explained.
As for those casting the spell, Father Lampert said they are relying on evil that feeds on anger and revenge. “People will be to find themselves more deeply entangled with the devil,” he said. “Their lives will continue to spiral out of control because they do not have God as an anchor.”
Prayers for protection against spells are very effective, according to Father Lampert, but we should not just be reactionary. “We should always be proactive in our faith and praying for our leaders­­—both civic and religious—as a normal part of our everyday action,” he said. “I would hate to think our faith is just reactionary. Scripture tells us to pray unceasingly.”

~~~~~~
For more inspiration check out Patti's latest book: Holy Hacks: Everyday Ways to Live Your Faith & Get to Heaven. Other books include:  Big Hearted: Inspiring Stories from Everyday Families and the best-selling Amazing Grace Series.
Follow Patti at Twitter and Pinterest, like her pages at Holy Hacks, Dear God Books,  Big Hearted Families,  Catholic News & Inspiration on Facebook, and her author Facebook page.  To receive articles in your inbox, sign up at the right column. Thanks for stopping by.  God bless you!