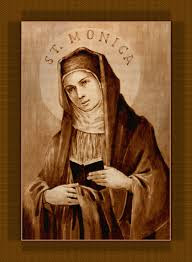 “I should have been a better mother,” St. Monica said to Bishop Ambrose about her son Augustine.
“If Augustine had been an easier child, God would not have given him a mother like you,” he responded. –Dialogue from the movie Restless Heart: The Confessions of St. Augustine.

When a saint prays for her son for 33 years before he becomes Catholic, how long will less holy people have to pray for their children? That, is the reason I did not like the story of St. Monica.  Of course we should never give up hope and keep praying no matter how long it takes, but no one wants to wait that long for prayers to be answered.


As the long-suffering mother of St. Augustine, Monica prayed unceasingly for the conversion of her rambling husband and her wayward son. She cried so much over the years that St. Ambrose famously said, “Woman, the child of so many tears shall never perish.”
Such a perspective is balm to a parent’s praying heart.  Yet, the story of St. Augustine and St. Monica was one that I once did not particularly like.  Monica shed many tears and stormed heaven for his conversion until his baptism at the age of 33.
My mother’s heart tends towards impatience, wanting my children to be close to God now and always.  St. Monica was a saint, yet the results of her prayers were slow in coming.  Or so it seemed to my limited thinking. During a homily at Mass one morning, my pastor presented a perspective on Augustine’s conversion.
“He lived over 1,500 years ago,” Father stated. “Yet his books are still sold in bookstores. People have been reading his words for over 1,500 years.”
At that moment, I understood that the magnitude of Augustine’s conversion dwarfed the years of his mother’s prayers.  His prolific words (no author from antiquity has left us more—5.4 million) have reached through the ages.  Instead of looking upon the story of Saints Augustine and Monica with impatience, I suddenly saw the power behind such a mother’s prayers.
Augustine began listening to the great preacher Ambrose.  He was intrigued yet conflicted.  Augustine still sought truth because he had never been satisfied.  Ambrose told him: “It’s truth that finds the man because the truth is a person. It’s Jesus, the Son of God.” 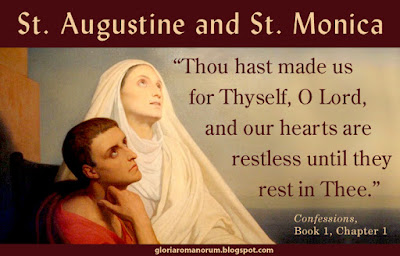 One afternoon in his garden, Augustine wrestled with his thoughts until God finally reached him.  The great orator stopped talking and began to listen to Bishop Ambrose.  Augustine repents and gives himself completely to Christ.  Ambrose baptized him, imparting the peace of Christ to Augustine’s once restless heart.
From that point on, St. Augustine’s gifts of rhetoric and oration once used selfishly and even against the Church, were used to serve the Church.  And they still do, over 1,500 years later.
St. Monica’s son became a saint and a doctor of the Church. She faced a culture in which Christianity had not yet fully taken hold; we live in a culture in which Christianity is no longer taking hold and our children are slipping away from the faith.  She understands what we are up against.  Pray for her intercession,

Exemplary Mother of the great Augustine,
you perseveringly pursued your wayward son
not with wild threats
but with prayerful cries to heaven.
Intercede for all mothers in our day
so that they may learn to draw their children to God.
Teach them how to remain close to their children,
even the prodigal sons and daughters


who have sadly gone astray.