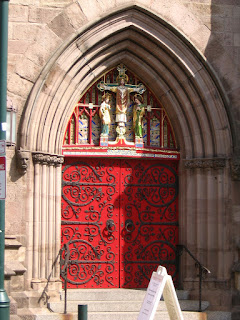 The high sounding word “tolerance” has become a ruse for coercion of liberal agendas.  The “wall of separation,” so often distorted from Thomas Jefferson’s intent to point out the need to prevent government from meddling in religion, is crumbling.
Despite pediatricians identifying youth transgenderism as "child abuse"), the left is demanding that everyone, even churches comply with transgender acceptance. Last month, Massachusetts enacted a law forcing everyone, including churches, to use the gender identity of a person's choice. It is the most oppressive LGBT non-discrimination laws in the U.S. Churches are specifically mentioned as needing to comply.


The restrictions are many, including restroom and locker room accommodations and the demand that people be addressed by the pronoun of their choosing.  This is not acceptable for many Christian churches and schools who follow Scripture: “God made them male and female.”

Pope Francis
Under this Massachusetts law, refusal to marry same-sex couples can be a crime. And how will this play out considering Catholic's have an all-male clergy and sex-specific religious orders for monks and nuns? 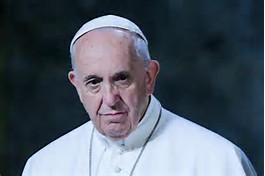 Pope Francis recently called transgender teaching against nature in August before bishops in Poland, and again in October on a return flight to Rome following a trip to the countries of Georgia and Azerbaijan.
Referring to meeting with a French father whose young son wanted to be a girl after reading about it in a textbook, Pope Francis said: "This is against nature. It is one thing when someone has this tendency ... and it is another matter to teach this in school."
The pope expressed that he spends time with transgender people, leading them closer to God but for schools to teach and encourage this, he called, “ideological colonization."

Government Employee fired over Church Sermons
In the state of Georgia, a public health official who is also a lay minister at his Seventh Day Adventist church, was fired over his church sermons.  He has been ordered by the state’s attorney general to relinquish his sermons to the government, according to federal court documents. 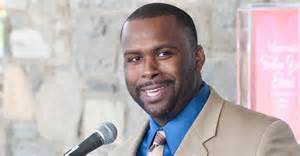 Dr. Eric Walsh, a public health expert with several advanced degrees, served as the director of the City of Pasadena’s Public Health Department.  He had earlier been appointed to President Obama’s Presidential Advisory Council on HIV/AIDs. Since his hiring in May 2014, Dr. Walsh’s list of on-the-job accomplishments were many, but he was fired after state officials asked him to submit recordings of his sermons.
First Liberty Institute filed a religious discrimination lawsuit in September against the State of Georgia on his behalf, contending that no one should be fired for something he said in a sermon. The DPH Director of Human Resources sent an email to other department employees, stating: “OK…I have an assignment for several of us. We have to listen to his sermons on YouTube tonight. If we take a couple of hours each, then we should cover our bases.” (View the email).
The next day, Dr. Walsh was fired via voicemail.  Then, not realizing the call had not ended, comments and laughing can be heard at the end.  (Listen to the voicemail). He has been unable to get a job in public health since then.
Freedom of religion is ebbing away because conservatives are being pegged as holding back society.  In Hillary Clinton’s April 23 speech at the Women in the World Summit, she pledged to change religious beliefs regarding abortions."  Laws have to be backed up with resources and political will. And deep-seated cultural codes, religious beliefs, and structural biases have to be changed."   She does not understand how faith works and sadly, she is not alone.
Archbishop Fulton Sheen
Ven. Archbishop Fulton Sheen put politics and religion in perspective in his book Characters of the Passion written in 1947.  He considered the characters that played a role in the Passion of Jesus Christ and related them to our modern world. 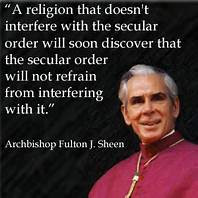 Sheen wrote: The Church does not interfere in politics.  If by interference in politics is meant judging or condemning a philosophy of life that makes the party or state, or the class, or the race, the source of all rights, and that usurps the soul and enthrones party over conscience and denies those basic rights for which the war was fought, then the answer is emphatically Yes!
“The Church does judge such a philosophy.  But when it does this, it is not interfering with politics, for such politics is no longer politics but theology. When a state sets itself up as absolute as God, when it claims sovereignty over the soul, when it destroys freedom of conscience and freedom of religion, then the state has ceased to be political and has begun to be a counter-Church.”
Sheen explained that the Church teaches that the state is supreme in temporal matters.  But when politics make religious proclamations such as women have the right to end the life of their unborn babies – politics enters religion and claims supremacy over the human soul.  He reminded his reader: “It was Jesus Christ who suffered under Pontius Pilate; it was not Pontius Pilate who suffered under Jesus Christ.  The grave danger today is not religion in politics but politics in religion.”
Sheen equated God’s truths with true freedom: “Christ’s Church will be attacked, scorned, and ridiculed, but it will never be destroyed…. The bold fact the enemies of God must face is that modern civilization has conquered the world, but in doing so has lost its soul…. And as religion fades so will freedom, for only where the spirit of God is, is there liberty.”
~~~~~