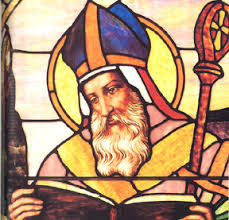 I write this on April 11, the Feast of St. Stanislaus.  His name always reminds me of a humorous incident.  I was working as a dental assistant while still in high for a father and son team. One afternoon, the elder dentist called me into the room with a young patient.
“Go ahead,” he said to the second grade little boy.  “Tell her your name and what school you go to.”
“My name is Thteven Thelke and I go to Thaint Thtanithlauth thcool,” the young lad dutifully replied.
Dr. Lynch smiled and whispered to me, “Maybe his parents should send him to a different school.” 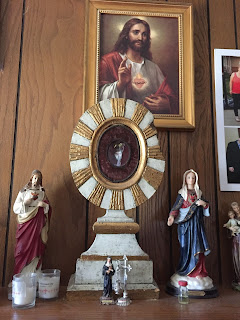 I trust that Steven Selke has a handle on the letter “s” by now. Many years later, I again encountered St. Stanislaus. My husband Mark had the opportunity to purchase two reliquaries from a church that was closing.  In them were the relics of 4 saints. Relics themselves cannot be sold, so he was paying for the old wooden reliquaries.  A relic of St. Stanislaus was in one of them. 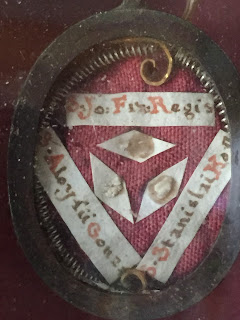 His Life and Death
Along with the relics came information on each of the saints.   We learned that St. Stanislaus Szczepanowski (separate from St. Stanislaus Koska) died at the age of 48, martyred by the Polish King Boleslaus II the Bold on April 11,1079.  There is some disagreement as to the date of his death, so in Poland his feast is celebrated on May 8.
Stanislaus was born in Southern Poland, the only son of noble and pious parents. He became a priest and served the Church of Krakow. After the death of his diocese’s bishop, Stanislaus was chosen his successor in 1071 and became an influential preacher.
However, his influence brought him into conflict with King Boleslaus II, who was notorious for his violent and depraved lifestyle.  After a series of disputes with the king, Stanislaus failed to reform him and finally excommunicated the sovereign. The king accused Stanislaus of treason, and personally killed him with a sword while he was saying Mass.   His many faithful followers were outraged, which led to the king’s dethronement. Stanislaus canonized by Pope Innocent IV in 1253 and is the patron saint of Poland.

Honored by St. Pope John Paul II
As pope, Saint John Paul II –often honored him. In a 2003 letter to the Polish Church, he said of St. Stanislaus: “He taught the moral order in the family based on sacramental marriage. He taught the moral order within the State, reminding even the king that in his actions he should keep in mind the unchanging Law of God.” Through St. Stanislaus, God taught the Polish Pope's homeland to respect “the Law of God and the just rights of every person.”

St. Stanislaus, pray for us!  Help us to have courage like you had to be not afraid to speak the truth.
Posted by Patti Maguire Armstrong