Is ISIS a Spiritual Consequence of Abortion?

Killing began long before terrorism and abortion, so it’s easy to separate the two as having nothing to do with one another.  But in conversation,  if you link abortion to the rise in terrorism, most pro-life Christians will nod and say: Of course.
Associating terrorism with abortion is not something done in polite company, or at least not in politically correct company.  It invites a religious wacko label. I will risk the disparaging label to say that I believe that the legalization of abortion around the world has created fertile ground in which ISIS and all terrorism has thrived.
Abortion is death at the beginning of life. Whether through dismemberment and suction, or putting a hole in the skull of the unborn baby and sucking the brains out, it’s all heinous. Terrorism is the natural course for a culture of death even though it often comes at us  from the outside.

Imagine the view from Heaven, looking down upon a people spewing vitriolic arguments against the defenders of unborn babies. They mock advocates for life while hiding abortion’s ugly realities. Then, from that same vantage point, cries for protection against the atrocities of terrorism drift upwards.  Lord, protect us from these cold-blooded killers; from those that chop off heads of innocent victims and kill without regard for humanity. Ironically, it is the same prayer that ascends from the lips of pro-lifers, pleading for the lives of the unborn slated for killing by abortion.
Granted, many abortion enthusiasts don’t pray at all. Regardless, it’s hypocritical to expect the atrocities of terrorism to stop while perpetuating that very thing in the womb.  Terrorism begins with us.

Mother Teresa Called It
According to the World Health Organization (WHO) there are an estimated 40-50 million abortions a year in the world; approximately 125,000 per day. In the US, there are around 3,000 unborn babies aborted per day. So much killing. 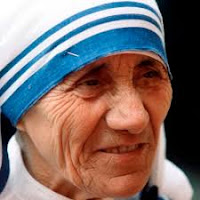 Barbarism seems built into the human DNA. Or rather, into original sin.  With abortion, the enemy to be killed is a tiny baby whose crime is its mere existence. Human life has become cheap, sold once, then twice; first the killing fee, then a resale of parts. We do not exist in a spiritual void, so evil has consequences.
Mother Theresa once said:
The biggest destroyer of peace today is abortion, because it is a war against the child - a direct killing of the innocent child - murder by the mother herself. And if we accept that a mother can kill even her own child, how can we tell other people not to kill one another? …Any country that accepts abortion is not teaching the people to love, but to use any violence to get what they want. That is why the greatest destroyer of love and peace is abortion.”

To quote Mother Teresa again, when she spoke at the National Prayer Breakfast in Washington in 1994, she said:
"What is taking place in America is a war against the child. And if we accept that the mother can kill her own child, how can we tell other people not to kill one another."

We look to the horror of a civilization that accepts abortion, but it is not the starting place. It began with the delusion of situational ethics where sin is seen as a freedom rather than imprisonment.  The Bible is full of examples of God’s chastisements for disobedience. He allows us to reject him and then he withdraws his protective hand so that the chaos of the sin follows its natural course.  It is a tragic irony that cultures that brutally kill the unborn are then outraged by other brutal killings that they deem less civilized.
Rather than stand by feeling helpless, God has given us remedies in prayer, fasting and the sacraments.  In modern times, he has given us additional remedies to make reparation for the sins of mankind.

Weapons of Fatima
Our Blessed Mother appeared to the three shepherd children at Fatima, she told them to turn from sin, which draws down God’s chastisements on the world, and to make reparation for them. In August of 1917 Our Lady told the children, “Pray much and make sacrifices for sinners, for many souls go to hell because there is no one to make sacrifices for them…. Sacrifice yourselves for sinners; and say often when you make some sacrifice, 'My Jesus, it is for love of You, for the conversion of sinners, and in reparation for sins committed against the Immaculate Heart of Mary.'"
Sr. Lucia—one of the Fatima children who became a nun-- reported that it was her impression that the Rosary was of great value, a weapon, in which our lady asks our cooperation and will do the rest for us.   As a way to make atonement for sin, Our Lady made known her request to Sr. Lucia, for Communions of reparation. "My daughter, look at my Heart encircled with the thorns with which ungrateful men pierce it at every moment by their blasphemies and ingratitude. Do you at least try to console me and announce in my name that I promise to assist at the hour of death with the graces necessary for salvation all those who, on the first Saturday of five consecutive months, go to Confession and receive Holy Communion, recite the Rosary and keep me company for 15 minutes while meditating on the mysteries of the Rosary with the intention of making reparation to me."

Divine Mercy Can Save Us
The message of Divine Mercy that Sr. Faustina received from Jesus offers mercy for our troubled times.  God wants us to recognize that His mercy is greater than our sins. If we will call upon him with trust, we can receive his mercy and let it flow through us to others.

We can pray the Chaplet of Divine Mercy daily.  The Feast of Mercy, celebrated on the first Sunday after Easter, is an opportunity for mankind to turn to the fount of God’s mercy.
Pope Francis has called an extraordinary Jubilee Year of Mercy from Dec. 8, 2015, the feast of the Immaculate Conception, to Nov. 20, 2016, the feast of Christ the King. "Merciful like the Father" is the motto he chose for the Jubilee Year.  This is only the fourth time in Church history there has been an extraordinary Jubilee Year.
Mercy has been the theme of Pope Francis’s pontificate.  This is also the teaching transmitted by St. Faustina in her Diary.  [Jesus said,] "I am prolonging the time of mercy for the sake of [sinners]. But woe to them if they do not recognize this time of My visitation" (1160). "Before the Day of Justice I am sending the Day of Mercy" (1588). "He who refuses to pass through the door of My mercy must pass through the door of My justice" (1146).
As faithful Catholics, it wearies our hearts to watch the culture of death spread, but we are neither helpless nor alone. It is about conquering evil.  Through the Church approved messages from Fatima and on Divine Mercy, God gave us tools to cling to as the future unfolds.