Father Calloway: Our Lady of Fatima’s Remedy for Our Times 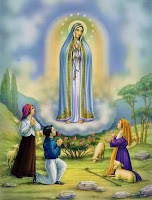 “I expect to be imprisoned during my priesthood.”  I hear it over and over these days from priests and seminarians.  No doubt you have too.
The state-driven persecution has arrived, fueled by the Supreme Court’s annihilation of civilization’s primary institution of marriage.  Their 5-4 decision on June 26, legalizing same-sex "marriages" nullified the role of procreation and the basic emotional needs of children in marriage.


“The majority's decision is an act of will, not legal judgment," Justice Roberts wrote in his minority opinion. "The right it announces has no basis in the Constitution or this court's precedent."  Or, in God’s law.  They denied God’s authority and our right to follow him.  And so begins a new phase of practicing Christianity in the United States.
The state can now persecute anyone for not going along with a tenant also held by the Church of Satan—that homosexuals should be allowed to marry.  Go along or face persecution as Kim Davis of Rowan Country, KY learned this week. She was jailed by a U.S. District Judge after she insisted that her "conscience will not allow" her to issue marriage licenses to homosexual couples. "God's moral law conflicts with my job duties," Davis stated before she was taken away. "You can't be separated from something that's in your heart and in your soul."
She is the first to be imprisoned although Judges have ruled against bakery owners and photographers who cite Christian beliefs as not allowing them to provide services for same-sex weddings.
It’s an old story with a new twist. Defending the sanctity of marriage is also the reason that Saint Thomas More and Saint John Fisher were imprisoned and martyred in England during the 1600’s.  King Henry VIII usurped Papal authority, making himself the head of the Church and trampling on its teaching on marriage.  More, who had been made Lord Chancellor by the king, refused to compromise his beliefs for worldly prestige, so he was be-headed.

“This is the battle of our times,” Fr. Donald Calloway said of same-sex marriage and abortion. “And many Catholics have not been on the front lines.” He pointed to Catholics as being responsible in many ways, such as officials that claim to be Catholic while promoting legislation that opposes Catholic teaching.  “There is also a crisis of professing to be Catholic, but then voting for leaders who support abortion and same-sex marriage,” Fr. Calloway said.
By going against God, Fr. Calloway pointed out that we are also hurting and offending our spiritual mother, Mary.  “What child would want to put their mother in pain?” he asked.  “Catholics don’t realize that when they don’t defend their Church, they are responsible for the wound and sorrow and tears of their Heavenly Mother.”
Fr. Calloway, who has a strong devotion to the Blessed Mother, explained that when she appeared to the three shepherd children in Fatima, she brought a Peace Plan that included the Five First Saturdays devotion to make reparation against the sins of mankind.
Every time Our Lady of Fatima appeared to the children, she made it clear that sin offends God and sin affects what happens worldwide. Our Lady explained that to bring peace and save souls, we must pray.  During every apparition, she asked the children to pray the rosary.

Pope John Paul II said: “The rosary is by nature a prayer for peace, focusing our eyes on Christ. The rosary also makes us peacemakers in the world.  Pray the Rosary daily! The Rosary can end wars! The Rosary can bring world peace.”
The oldest of the children, Lucia, became a nun after the other two, Jacinta and Francisco, died at young ages. Our Lady of Fatima made promises to Lucia for all who practice the devotion of the First Five Saturdays. She told Lucia that she would assist at the hour of death with all the graces necessary for salvation, to all those who, on the first Saturday of five consecutive months, go to Confession and received Holy Communion, recite five decades of the Rosary and keep her company for fifteen minutes while mediating on the mysteries of the Rosary, with the intention of making reparation for sins.   Everything is to be offered to make reparation for sins.


Fr. Calloway made the Five First Saturdays thirteen years ago.  “I learned about it during my last year in seminary and wanted to do everything I could before my ordination to consecrated myself to Mary.”  It was just last month that he decided to practice the devotion again.  “Maybe it’s selfish on my part,” he said, “but the times are so crazy and messed up and I want to be prepared for death.” He explained that he desires to make reparation for sin but that he also seeks the graces needed for salvation. “I haven’t crossed the finish line yet,” he said.  “And I want to reap the promise of Our Lady, to grant the necessary salvation for those that practice the devotion.”