Badge of Courage, by Christine Trollinger


In the spring of 1967, my younger brother Mike was reported missing in action in Vietnam.  Although it was just a clerical error on the part of the Marines, it gave us all a horrible fright.  First, we received a telegram stating Mike was missing in action. Then another informing us Mike had lost his legs and was critical. Then followed the nightmare of a Marine officer and chaplain arriving on my parent’s doorstep with the news Mike had died.
It turned out Mike was actually recuperating from a minor wound in Tokyo, Japan. He called soon after we received the mistaken report. At this point, my older brother Bill put college on hold and re-joined the Marines. He asked for duty in Vietnam to be with our brother Mike. His hope was to convince Mike to file under the Sullivan ruling which states that no more than one family member has to serve in a life-threatening situation at a time.
Bill wanted Mike in a safer place--out of the combat zone-- while he served in ‘Nam himself. Bill always looked out for his three younger siblings, and he was determined to do so again. If Mike refused to leave, Bill figured they could at least support one another.
On the day he was to leave for retraining, the last thing my father did was to make sure Bill was wearing his Sacred Heart badge. My parents had my sister, two brothers, and me consecrated to the Sacred Heart while were babies. They made sure we made the First Friday devotions, which were given to St. Margaret Mary. It was to her that Jesus revealed his promises concerning devotion to His Most Sacred Heart. 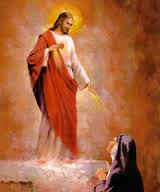 Daddy jokingly told Bill: “It might not stop a bullet, but it can keep you safe along the way.  Just remember it is only as good as the faith you put with it. If you wear it as a scrap of material and don’t follow Christ, it will be no help at all. Remember what’s important--trust Christ and follow him. He will get you home. Ask St. Margaret to help you too. That’s all the protection you really need.”

For more inspiration, check out Big Hearted: Inspiring Stories From Everyday Families. Your children will laugh while learning spiritual lessons with Dear God, I Don't Get It! and Dear God, You Can't Be Serious.