Dear Lord, I pray for the conversion of ______(fill in the blank).  We all have names to insert.  Divine lightening to strike them into holy submission would be lovely, but even a simple push in the right direction would be mightily appreciated.
“Whatever you ask in My name, that will I do, so that the Father may be glorified in the Son,” John 14:13. God will keep his promises, so in Jesus’ name we pray. And wait.


Waiting tempts us to impatience. Yet, there is always the story of St. Monica.  The conversion of her son St. Augustine happened after she prayed for 17 years. (Some calculate it as more years, depending on when you start counting, but suffice to say she got down on her knees quite a few times.)
Why so Long?
I once did not like the story of St. Monica. Why did it take so long? Faithful Catholics will not quit praying at year 16, so naturally, making it to 17 is par for the Catholic course, but why didn’t God do his divine work in year 2 or 3?  Wouldn’t an earlier conversion have given St. Augustine more time to win friends and influence others for God? 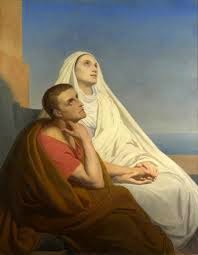 Several years ago, on the feast of St. Augustine at a weekday Mass, Fr. Thomas Kramer, (now deceased, God rest his soul) made a point during his homily, that put the long prayerful wait into perspective.  “The books that St. Augustine wrote are still sold in bookstores over 1,500 years after his death,” Fr. Kramer said.  “His conversion has influenced the world for that long.”
The light went on. Those years of prayers did not just win a single conversion in one place and time, but St. Augustine’s conversion was for the ages. St. Monica’s prayers have reached into the Twenty-first Century.
Christianity is about Conversion
The story of Christianity is the story of conversions beginning with the ministry of Jesus Christ.  St. Matthew walked away from tax collecting, Zacheus climbed down a tree, and Mary Magdeline got off her path to hell to follow Christ. St. Paul was knocked down off his horse and the scales to fall from his anti-Christian eyes. And the conversions have never stopped. 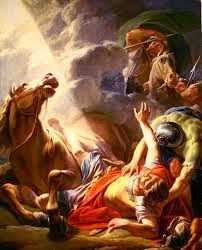 Fr. Benedict Groeschel, (God rest his soul too) once took a phone call during his EWTN Sunday night program from a person wondering why his prayers for an atheist seemed to be having no effect.  “God will administer the graces at which time they will do the greatest amount of good,” Fr. Groeschel responded.
I’ve interviewed people who have had dramatic conversions. The shocking ones—the ones that seemed almost impossible--remind me of St. Margaret Mary’s story. (She promoted the Sacred Heart devotion after receiving apparitions from Our Lord.) “Why me, Lord, I am so lowly? she asked Jesus.
“If I could have found someone lowlier, I would have,” he responded.  (Score one for humility.)
In the case of dramatic, overnight conversions for people with one foot in hell, they often ask, “Why me Lord?  I am such a terrible sinner, why did you suddenly reveal the truth to me?”
I feel that God might answer, “If I could find a more terrible sinner, I would have.”  It would seem that in the cases of the worst of the worst, God sometimes shows his Divine power to reach someone in an instant so that we see clearly that no one is so lowly as to be beyond his reach.
Power of a Praying Parent
In a recent homily during Mass on ‎EWTN, Father Miguel’s advised parents to keep praying the baptismal prayers for their children.  He said many parents have shared successes through that prayer.
Here it is:  Lord Jesus, on behalf of my son / daughter, N., I renew his / her baptismal promises which took place on the day of his / her baptism; please bring him / her back to the Sacraments for your glory.  I renounce Satan, and all his works, and all his empty show.  I believe in God, the Father almighty, Creator of heaven and earth.  I believe in Jesus Christ, his only Son, our Lord, who was born of the Virgin Mary, suffered death and was buried, rose again from the dead and is seated at the right hand of the Father.  I believe in the Holy Spirit, the holy Catholic Church, the communion of saints, the forgiveness of sins, the resurrection of the body and life everlasting. Amen.  Almighty God, the Father of our Lord Jesus Christ, You have given us new birth by water and the Holy Spirit and bestowed on us forgiveness of our sins, keep us, especially my son / daughter, N., by your grace, in Christ Jesus our Lord, for eternal life. AMEN!
***
Follow Patti at Twitter and Pinterest, like her pages at Dear God Books,  Big Hearted Families,  Catholic News & Inspiration on Facebook, and her author Facebook page.  Sign up at the right column to receive articles in your inbox.  God bless you!
Posted by Patti Maguire Armstrong