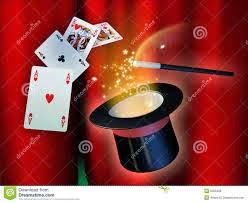 Dear Atheist,
There’s nothing like a good magic show, huh?  Harry Houdini, the all-time great illusionist, knew this.  David Copperfield is right behind him in the theater of trickery as the highest paid magician in all of history. What you see is not always what you get, right?  But what you fail to see with religion is that what you get is not only what you see.


I came across your blog, Common Sense Atheism in which you said that believers in religion really just believe in magic.  Oh, wait.  I was going to skip over the name of your blog, but I can’t.  Common Sense?  Aside from the fact that you admit the majority of people don’t agree with your belief— which makes it the very opposite of “common” -- you think that the universe and every mind-boggling thing in it just happens to exist, but a creator cannot exist—so there goes the “sense” too.
But let’s not get bogged down in a few glaring ironies. I want to explain something else here: magic is not religion.  You call people with faith in God, the “magical thinking community.”  That is so silly coming from someone who thinks the world made itself with a bit of good timing, convenient materials from out of thin air, and overcoming infinitely insurmountable odds.

Instead of all the talk of magic and who did or didn’t make all of existence, let me tell you something about religion that you don’t understand.  Religion is about a relationship with God. Christianity personalizes that relationship with God through Jesus Christ, both God and man, the second member of the Holy Trinity-- Father, Son, and Holy Spirit.  Oh, stop laughing at something you have not explored but handily reject.

You don’t know Jesus because you are intent on denying him.  If you would spend as much time researching the history that supports Jesus Christ as you do making fun of him, perhaps your cold, walled-off heart might get a glimpse of the Divine.  There is well-established testimony that after his crucifixion, on Easter Sunday, Jesus’ tomb was found empty by some of his women followers.  Given the patriarchal Jewish culture of the time, if a story was going to be made up, it’s extremely unlikely that women would have been the ones to discover the empty tomb and for the men to doubt the reality.

It is also widely acknowledged by scholars that there were many historical eyewitness accounts to Jesus appearances after his resurrection.   And the apostles and disciples who knew Jesus, later accepted martyrdom rather than deny him. Earlier in the Gospels, they had not a clue what was to come and everyone but St. John the Apostle ran away at the crucifixion. If men who were cowards in the face of the soldiers, later suffered death for claiming Jesus rose from the dead, what are the odds that it was a lie? Use your common sense.
Science is Our Friend

You love science and say it trumps religion. Catholics say science supports religion.  In spite of rumors, gossip, and lies,  nothing in science is contrary to religion and much of religion is supported by science.  If, instead of bashing every declared miracle, you took a closer look, perhaps you would see that some things cannot be explained by science.

The Shroud of Turin, the Miracle of Fatima, the tilma with the Image of Our Lady of Guadalupe, the many miracles of the Eucharist, and the intensely investigated miracles required to declare sainthood, are but a fraction of the evidence that leads to God.  I suggest you investigate these things with a quest for truth in order to weed through those determined to block it. Or deny it. Or fear it. Like you.
Magic and Catholics

Ironically, in spite of your accusation of magic, Catholics are forbidden to even dabble in real magic, which is considered occult.  In the article,  What is the Difference Between Magic and Religion?  Fr. Jose Antonio Fortea, an exorcist, writer,  and parish priest, separates the magic of illusionary entertainment with the dark magic of the occult. Although throughout history and in some cultures, magic and religion were sometimes mixed in with one another, there is a clear difference.

“Religion is obedience (to God); magic seeks power (over forces or beings),” he wrote. “Religion requires faith and worship; magic seeks control (over forces or beings). Religion requires us to change our lives; magic wants to change others through manipulation.” Fr. Fortuna explained that in religion, we adore God rather than as in the case of witches and sorcerers, seek to harness supernatural forces. Ultimately, religion is about a relationship with God, Fr. Fortuna said. “This relationship sanctifies us and keeps our minds and hearts focused on heaven.”

The Catholic goal is a deepening love of God and strengthening our relationship with him. It is a relationship that you lack so instead you mock it and claim we believe in magic.

We believe in an all-knowing, all-powerful God as the Creator of everything. You do not.  Instead, you believe that mindless nature stumbled into incalculable chance connections  under a coincidental atmosphere that made for the luckily perfect planet to PRESTO create and sustain all life.  And Earth’s orbit? Voila!  Perfect again for no reason.