A Winning Team: Pope Francis and Our Lady

What is the one thing that Pope Francis is rarely without? Hint: He always brings it with him and is seen wearing it in the majority of his pictures.
Give up?  It’s his smile.  In most of his pictures, he is smiling.  How comforting is that?  Pope Francis has the weight of the world on his shoulders as the Vicar of Christ on Earth.  He is very well aware of the state of the world, and yet, he smiles most of the time.


A smile is the reflection of inner happiness and peace while at the same time it shows a welcoming love and acceptance to those it shines upon.  We should all want what he has—that serene strength and calm amid the moral storm of our world. 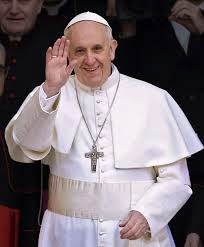 If Pope Francis is not freaking out over the state of our world, why should we?  He has far more on his shoulders than we do.  What is the secret to the happiness and well-being he radiates?

Advantages through Mary
I don’t know all of Pope Francis’s secrets to happiness, but I do know he has the assurance that the gates of hell shall not prevail against the one, holy, Catholic, and apostolic Church.  He has the Holy Spirit to keep him in truth.  And he has a strong devotion to Our Blessed Mother. He made this known his first morning as pope when he made a brief pilgrimage to the Basilica of Saint Mary Major, Rome’s principal Marian shrine.  Later, he asked the bishops of Portugal to dedicate his pontificate to Our Lady of Fatima.
To open the New Year this year, Pope Francis began with morning Mass in St. Peter’s Basilica, calling the faithful to look to Mary as a Mother and intercessor to all, and a messenger of hope.  He assured the faithful that through trying times, Mary’s “sorrowing heart was enlarged to make room for all men and women, whether good or bad, and she communicates her maternal affection to each and every person… a source of hope and true joy.” He invited everyone to entrust the Blessed Mother with “the journey of faith, the desires of our heart, our needs and the needs of the whole world, especially of those who hunger and thirst for justice and peace."
Pope Francis wants us all to enjoy the advantages of a relationship with Mary.  Last October 13, on the memorial of the last apparition to the children at Fatima, he formally entrusted the world to Mary before a congregation of more than 100,000 in St Peter’s Square. “Let us invoke Mary’s intercession,” the Pope said, facing the statue of Mary that he had brought in for the day from the shrine at Fatima, Portugal. “May she help us to be open to God’s surprises, to be faithful to him each and every day, and to praise and thank him, for he is our strength.”

Our Lady, Undoer of Knots
As most Catholics know, the love of Mary always brings us closer to her son Jesus, the one she always directs us to and tells us: “Do whatever he tells you” (Jn 2:5).   We go to Jesus but we bring his mother with us.
By now, many also know that one of Pope Francis’s favorite devotions to her is under the title, Our Lady Undoer of Knots, also known as Our Lady, Untier of Knots.  Under this title, we ask her to undo the knots—or problems—in our lives. 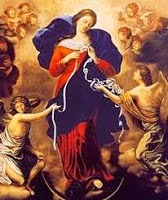 During the 1980’s when he was Fr. Jorge Mario Bergoglio, a Jesuit priest studying in Germany, he was deeply impressed by an early eighteenth-century Bavarian painting of the Blessed Virgin Mary under the title of the “Untier of Knots.”  The painting, shows Mary standing on the crescent moon surrounded by angels and with the Holy Spirit in the form of a dove hovering above a circle of stars as she unties knots into a long strip while resting her foot on the head of a tangled snake. The serpent represents the devil as referred to in Genesis 3:15: "[thy seed] shall bruise the serpent’s head".
The earliest known Devotion to the Blessed Mother under that name dates at least to the early part of the seventeenth century.  It was at that time a priest used this image of knots being unraveled and prayed to Mary for a German noble couple experiencing turmoil in their relationship.  Peace in their marriage soon returned. Years later, the grateful grandson of the married couple donated an altarpiece to the long-dead priest’s church, and the painter being aware of the family story, depicted Mary as the Untier of Knots.
The mention of Mary untying knots as early as the second century, less than 100 years after the apostles died.  Saint Irenaeus of Lyons wrote, “The knot of Eve’s disobedience was loosed by the obedience of Mary. For what the virgin Eve had bound fast through unbelief, this did the virgin Mary set free through faith.” (Adversus haereses, 3, 22).
This devotion has caught fire since Jorge Bergloglio brought a postcard of the painting to Argentina in the 1980s after he returned from Germany.  In Argentina and Brazil, churches have been named for her and devotion to her has become widespread.


Pope Francis’ Prayer to Our Lady, Untier of Knots
Holy Mary, full of God’s presence during the days of your life,  you accepted with full humility the Father’s will,  and the Devil was never capable to tie you around with his confusion  Once with your son you interceded for our difficulties,  and, full of kindness and patience you gave us example of how to untie the knots of our life.  And by remaining forever Our Mother,  you put in order, and make more clear the ties that link us to the Lord.  Holy Mother, Mother of God, and our Mother,  to you, who untie with motherly heart the knots of our life, we pray to you to receive in your hands (the name of person),  and to free him/her of the knots and confusion with which our enemy attacks.  Through your grace, your intercession, and your example,  deliver us from all evil, Our Lady, and untie the knots that prevent us from being united with God,  so that we, free from sin and error, may find Him in all things, may have our hearts placed in Him, and may serve Him always in our brothers and sisters. Amen.
There is not just one way to practice this devotion. We can invoke Mary under this title as we pray, asking for her help with the knots in our life and also pray a Novena to Our Lady Undoer of Knots in unison with the rosary.
____________________________________________________________________
For more inspiration, check out Big Hearted: Inspiring Stories From Everyday Families. Your children will laugh while learning big spiritual lessons with Dear God, I Don't Get It! and Dear God, You Can't Be Serious.
Follow Patti at Twitter and like her Facebook pages at Dear God Books,  Big Hearted Families and  Catholic News & Inspiration on Facebook.
Posted by Patti Maguire Armstrong