I have prayed it ever since.  Mary has not only helped me throughout my own life, but I believe she helped save my son’s life as well as the lives of his buddies during a difficult time.
My youngest son, Randy, was stationed in Kuwait during Desert Storm.  Like any mother would be, I was greatly concerned about his safety with so much combat all around him.  It was a terrible feeling of helplessness to know that Randy was surrounded by danger and there was nothing I could do to protect him.  Nothing, that is, except to pray.  In my helplessness, I knew that I had to put my son in our Lord’s hands and trust in Him. 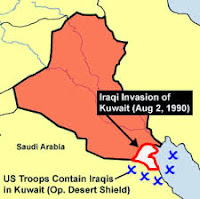 During this time, I attended a convention of the Diocesan Convention of Catholic Women in San Angelo, Texas. I spoke with Monsignor Rabroker, who is a friend.  When he  realized my son was stationed in Kuwait, he decided we needed to have a rosary said on my son’s behalf. I should add that Monsignor often invited me to pray the rosary with him if he felt that someone needed prayer.

Several other women agreed to join us.  We started the rosary at 11 p.m. and prayed until about 4 a.m. the next morning.  I prayed in earnest to the Mother of Jesus.  She knew my pain.  I trusted her with my prayers, knowing she would take my intention to her Son.
Two weeks later, I received a letter from Randy.  He wrote:

“At 2 a.m. there were bullets flying over me and my buddies.  I could hear them whizzing by.  I was scared and started praying. A calmness came over me and I realized that I was gonna be all right.  Some person told me I would be all right.  It was a voice from the sky.”

My heart warmed as I read those words.  It was the same day and time that Monsignor and I were praying the rosary.  I was certain that it was our Blessed Mother who spoke those words and comforted my son for me.  I took the letter to Monsignor, and he read it out loud at our next meeting of Catholic Women.  Among this room full of women of faith, it seemed everyone was filled with awe.  We all believed in the power of the rosary, but what a blessing it was to be witnesses to this power in such a concrete way.


Veronica is originally from Burlington, Vermont, and currently resides in Texas.  She and her late husband, Marion, a fomer Navy telegrapher and electronics technician, had seven children.

Amazing Grace for Families.
To keep the inspiration going, check out:  Big Hearted: Inspiring Stories From Everyday Families  a collection of stories on love and life. Children's books,  Dear God, I Don't Get It and Dear God, You Can't Be Serious are fiction that present faith through a fun and exciting stories.  Follow Patti at Twitter and like her Facebook pages at Dear God Books,  Big Hearted Families