‘Yeah, well your priests, like little boys.”
There it is. The slap in the face meant to silence a Catholic and degrade the priesthood.  You would think it had been enough already, but the priest/sex scandal card still gets played, often in comments under articles or on Facebook posts. It has shown up a few times in comments under my articles.
Too often, Catholics cringe and duck out. It was the goal all along of the one who spit out the vitriolic attack; to silence his opponent and chalk up one for the anti-Catholic team.  Should you end it and walk away?  As the saying goes, “Don’t fight with fools, they’ll beat you with experience every time.” But wait, priests act in the place of Jesus Christ. Will you not defend Christ?

Responding to a slam on the priesthood or anything against the Catholic faith is an opportunity to witness to others. I avoid engaging haters in their sport, but to varying degrees, I do respond.  After all, the media’s dogpile on the priesthood has left many misinformed.

The Statistics
Sex abuse of children is epidemic throughout society.  Pedophilia among priests is extremely rare, only 0.3% of the entire clergy (Yes, 0.3% is still too much but it's not the impression the public has.)  This figure was cited in the book Pedophiles and Priests: Anatomy of a Contemporary Crisis by non-Catholic scholar, Philip Jenkins.
In the Boston scandal, the media reported that eighty priests were pedophiles, yet ultimately, only four were actually guilty of molesting children. So in spite of the pedophile priest scandal being shameful, it’s nothing like the media has represented it.  The Media Report.com has reported that:
* “Catholic priests abuse at a rate far lower than that
of other males in the general population.”
*  Most of the reported cases of abuse were an historical anomaly, occurring during a narrow time period from the Sixties to the early Eighties.  The handling of those cases was a reflection of that era, not the Church.  Experts in the field at the time, believed offenders could be successfully rehabilitated. Offenders were sent for treatment, rather than reported to police, which resulted in a temporary spike in recidivism.
* It has been reported that sexual abuse by teachers in public schools is "more than 100 times" that by Catholic priests. Yet there is little reporting on this but old allegations of abuse by Catholic priests keep getting rehashed.

For more detailed statistics and findings see the John Jay report released on May 18, 2011 at John Jay College of Criminal Justice of the City University of New York which examined the clergy sexual abuse crisis in the U.S. Catholic Church in depth.
It is the most comprehensive study on child sexual abuse ever conducted by a major organization and covered the time period 1950-2010. During that time, 5 percent of the total number of priests during that period were accused of sexually inappropriate behavior and less than 4 percent of those accused could be considered pedophiles — that is, men who prey on children.
Findings included the observation that the Church has addressed this aggressively and “the decrease in incidence of sexual abuse cases by clergy was more rapid than the overall societal patterns.”
According to an article in the secular Psychology Today,  “Overall, the profile presented by the John Jay researchers (who, by the way, are non-Catholics working in a secular state run university) of the typical clergy sex offender in the Catholic Church is certainly quite different than the stereotype typically presented in the press during the past decade.”

Why the Bullying?
Why has the media vigorously attacked the priesthood?  I believe there are several reasons.  Part of it is an anti-Catholic and anti-religion mindset.  Protestant faiths, even if they split from another Protestant sect, ultimately broke away from the Catholic Church so that is the one they tend to discredit in order to defend themselves.  And if one opposes Catholic teaching on contraception, homosexuality or anything else, then the priesthood is a favorite target.
Another reason for the attacks speaks to the true value of the priesthood.  Catholic priests are held in high esteem, above other denominations and occupations. An offending priest is bigger news than when anyone else in society offends.  We expect more from them.   The sensationalizing proves that priests really do hold a special place in our world. 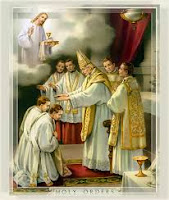 We have greater expectations for the priesthood because it is greater.  Why else, when Hollywood makes a movie on exorcism, it is a Catholic priest that goes head to head with evil?  The Catholic priesthood represents Christ and Christianity in a bigger way than other denominations. Priests bring us the Eucharist and absolve our sins in the place of Jesus during confession.  The shockwaves for wrongdoing are much fiercer because of what is represented by them. Even non-Catholics, whether they like to admit it or not, hold priests to a higher standard.
Thus far, when I’ve encountered such attacks, I respond that although it's understandable that priests are held to a higher standard, it’s well documented that there are as much or more abusers in the general population. And any priest that has abused, behaved in stark opposition to Catholic teaching so rather than represent the Church, he betrayed it.  It sometimes silences them and if not, I do not feed the trolls further.
The point is that not only should we defend our priests, but knowing the facts makes it easy.  And aside from the facts is our witness, loyalty, and courage to our beloved shepherds and faith.  If Catholics everywhere spoke up (without getting sucked into mud slinging) more detractors would be better informed and less inclined to risk looking like ignorant bullies.

Prayer for Priests
By St. Therese of Lisieux
O Jesus, eternal Priest,
keep your priests within the shelter of Your Sacred Heart,
where none may touch them.
Keep unstained their anointed hands,
which daily touch Your Sacred Body.
Keep unsullied their lips,
daily purpled with your Precious Blood.
Keep pure and unearthly their hearts,
sealed with the sublime mark of the priesthood.
Let Your holy love surround them and
shield them from the world's contagion.
Bless their labors with abundant fruit
and may the souls to whom they minister be their joy and
consolation here and in heaven
their beautiful and everlasting crown. Amen.