Prayer is a lethal weapon. But in the hands of the enemy with sacrilegious intentions, it is useless. Although abortion workers continually say that prayer vigils outside abortion clinics are ineffective, they are attempting to use prayer to launch a counter-offensive. Unfortunately, they lack the knowledge of how such a weapon works.

40 Days for Life’s semi-annual prolife campaigns rely on this “ineffective” weapon every spring and fall with prayer, fasting, and peaceful vigils in front of clinics in cities throughout the U.S. and in other countries.  Last spring, in Eureka, California and now again this fall in Fargo, North Dakota, pro-abortion forces are imitating 40 Days for Life by having their own so-called 40 days of prayer for abortion.
The same evil that has confused them into thinking that aborting babies is empowering for women, has confused them into thinking that God will answer their horrifying intentions. They are praying for God to support them breaking the Fifth Commandment—Thou Shall Not Kill—to protect the legal destruction of innocent, unborn souls. It is disturbing.

In North Dakota, pro-life forces are formidable. There are no abortionists and only one abortion facility—the Red River Women’s Health Clinic in Fargo.  Abortion doctors come from out of state on Wednesdays--usually the only day abortions are done.  On that day, across the street from the clinic on the third floor of an office building, is the Visitation Chapel where 8 a.m. Mass is said. Then, from 8:30 until 4pm-- the time abortions are done--there is Eucharistic adoration.  And every fall, in front of the abortion clinic, there is a 24-hour, 40-day prayer vigil as part of the 40 Days for Life campaign to pray to end abortion.
Although personnel at Red River claim the 40 days of prayer have no effect, this fall, they are holding their own 40 days of prayer for abortion. On the first day of the 40 Day's campaign the clinic’s website stated: “Today begins the 40 Days for Life outside our clinic…We will be posting the 40 Days of Prayers to End the War on Women... A prayer can be made to wish for something fervently, and not necessarily in the traditional Christian way…”

Their Facebook page prayer intentions are posted daily. Here is a sampling: 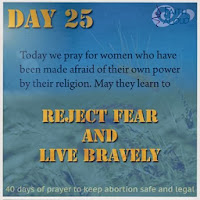 “DAY 18 Today we pray for all the staff at abortion clinics around the nations. May they be daily confirmed in the SACRED CARE that they offer women.”
“DAY 20 Today we pray for the families of yesteryear who still mourn the loss of their mothers, sisters and aunts due to illegal abortion”

There’s no mention of the women who die from legal abortions. Perhaps they don’t know about them since the secular media does not usually report those deaths.  And no tears for the aborted babies.

“DAY 25 Today we pray for women who have been made afraid of their own power by their religion. May they learn to REJECT FEAR AND LIVE BRAVELY.”

My inclination is to ask, Where the hell do they think this prayer is going?  But then, the answer to that is in my question.

DAY 28 Today we pray for the women who travel HUNDREDS OF MILES to get an abortion.  May their DETERMINATION be rewarded with SPIRITUAL STREGNTH.”

And a flat tire before they reach the clinic. Then a change of heart.

At the end of each daily intention is the message: “40 days of prayer to keep abortion safe and legal.”  They apparently have missed recurring news stories such as Dr. Gosnell’s House of Horrors and of women’s deaths from botched abortions and the frequent horrendous conditions and practices that keep ambulance numbers on the clinics’ speed dial.

Clearly, 40 Days for Life is making pro-abortion activists uncomfortable. There have been 2,480 total 40 Day campaigns in 501 cities and 19 countries. Although the effects cannot completely be counted, at least 7,536 babies have been verified as saved, 83 workers quit and 40 clinics have closed. Prayer works.


I hope that somewhere in this battle for life, between mocking and imitating, that some of the confused will become the converted. They are playing with fire. Only the devil wants to answer their sacrilegeous prayers but only God can answer prayers. So perhaps some will attempt real contact with God and be changed.  God has a way of doing that to people. We can  pray they will be so blessed.
______________________________________

For more inspiration check out:  Big Hearted: Inspiring Stories From Everyday Families , a collection of  22 stories, that share a glimpse inside the triumphs, struggles, joys, and sorrows of ordinary families with generous hearts.

Dear God, I Don't Get It  blends drama, humor, and inspiration in a fictionalized story to address questions faced when prayers seem not to be  answered―most importantly, “Is God even listening?”