Dying to Live and Living to Die 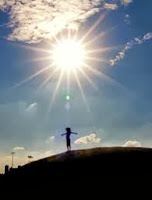 Can a death sentence improve your life?  Do you live life to the fullest?  That includes eternity.  Yet, who among us lives as if death is coming?
The default setting for most is to live merely—or at least mostly—for Earthly life.  In such a case, a death sentence can be a great blessing.  Suddenly, reality becomes real.
The Gift of Cancer
For Richard J. Cusack, Sr., who was once the president of a consulting firm in Wayne, PA, life was very good.  In 1992, on New Year’s Eve, he felt he had it all. (This story is excerpted from “The Gift of Cancer” by Susan Brinkmann as part of the collection in Amazing Grace for Survivors.)   “I was at a party in a big home in Newtown Square, a hundred people, lots of champagne,” Cusack said. “I had just turned 52. When it came time for the toast, I remember turning to my wife, Martha, and saying, ‘Well, I can finally say it. This is our time. We’re on top of the world. We have the home, the shore place, and the boat. We can travel. Our kids are grown. I’m just about ready to semi-retire.’”
Two months later, during a routine physical, he was diagnosed with thyroid cancer. To prolong his life, doctors performed a thyroidectomy, which meant removing the control mechanism for 25 different body functions from hormones to sleep cycles. In a matter of months, he said, “I went from the top of the world to the depths of hell.”

Although he had faith and went to Mass each Sunday, God had been a low priority.  Life became so painful that he prayed to die. “I never asked for a miracle because I never thought I deserved one,” he said. “What did I ever do for God? People would say all the time that they understood how frightened I was about the cancer and I’d say, ‘I’m not frightened about the cancer. I’m frightened about the final judgment.’”
Cusack began attending Eucharistic Adoration every day. One day, a tiny 80-year old nun named Sister Theresa approached him and said, “Richard, you must have great faith and trust in God. No matter what the future holds, you need to begin a journey that will bring you closer to Him.”

He took her advice and began to go to confession frequently, to daily Mass, and to visit the Blessed Sacrament. Two years later, in 1994, he was still alive even though he had health problems. “However, I still believed my remaining time on earth was short, so I decided to really say ‘yes’ to Him for whatever time I had left.”
That’s when things began to happen. One of the sisters encouraged him to write down his experiences for others. He composed ten different brochures, which were widely distributed. He told his story on a Catholic radio show and had so many callers he ended up with his own show, “For Those Who Hurt,” which ran for several years.
One Friday afternoon at 3:00 p.m. during adoration while thanking God for all the extra time he had been given, he asked:  “Before I arrive at my final judgment, is there something I can do for you here on earth?” he asked God. “What would be pleasing to you?” Cusack was suddenly inspired to make a beautiful holy card with a monstrance and the words, “Do you really love me? Then come to me. Visit me before the Blessed Sacrament.” He sketched out the card and had 100 printed. He began giving them out and received requests for more.

Cusack then got a letter from Sister Roberta Ochs, President of the World Apostolate of Fatima in Portugal, saying that she had received a card and wanted 10,000 more to distribute to pilgrims. This was followed by another call from the Sisters of the Precious Blood in Manchester, New Hampshire, requesting 5,000 cards.  Before long, the cards were circling the globe and requests were coming in from everywhere. Accepting no donations, Cusack and his wife Martha box and ship thousands of cards every month from their home. They have distributed more than five million of them all over the world including in China.  Any donations are given to the Sisters of the Precious Blood who send the money to help seminarians studying for overseas missions.

“I can say there is a wonderful movement going on in the Catholic Church all over the world,” he said. “Churches are opening up for adoration. People are bringing their fears and anxieties to Jesus.”   It has been 21 years since his cancer diagnosis. “Was it a miracle that happened to me?" Cusack asks. "The miracle isn’t medical. I think the miracle is what the Holy Spirit has done with all this.”  (To order cards for distribution, write to “For Those Who Hurt”, 175 Strafford Ave., Building Four - Suite One, Wayne, PA 19087 or call 610-687-7660.)

God’s Bucket List
Some people, like Cusack, wait until death looks them squarely in the eyes before it occurs to them to live for God.  Only then was he led to touch the lives of millions and bring them closer to God.
In the movie, The Bucket List, two terminally ill patients (Jack Nicholson and Morgan Freeman) escape from a cancer ward to accomplish their list of dreams before they die.  But an end-of-life plan to prepare for facing God by indulging in worldly desires is foolish.  It’s more important to know what God’s has placed on our to-do list before leaving earth. 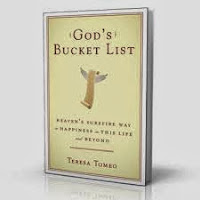 In the book (to be released Nov. 5) God’s Bucket List, author and EWTN TV and radio talk-show host Teresa Tomeo, challenges people to examine God’s to-do list for us.  As a one-time TV news reporter in Detroit, she once lived for worldly success.  Tomeo shares how the enviable career she had built for herself fell apart along with other parts of her life.  Not until she put God at the center did she find peace and a different kind of success. “Scripture tells us only God knows the desires of our hearts,” Tomeo says. “ It was, after all, God who placed them there because they are designed to lead us to His will for our lives.“  God's Bucket List examines God’s priorities for us which includes mercy, fruitfulness, fellowship, and peace.
Both Cusack and Tomeo were unwillingly knocked off their earthly paths and set on a heavenly course.  Rather than forcing God to come in after us, it is far wiser to go to him on our own.  Then, instead of having the things that ultimately turn to dust yanked from our shallow grasp, we can open our hands and hearts to the real treasures God is waiting to give us.
____________________________________________________________________


For more uplifting reading:   Big Hearted: Inspiring Stories From Everyday Families  a collection of stories on love and life, and  Dear God, I Don't Get It, children's fiction that presents faith through a fun and exciting story.
Follow Patti at Twitter or like her other Facebook pages at Dear God Books,  Big Hearted Families, A GPS Guide to Heaven and Earth
Posted by Patti Maguire Armstrong