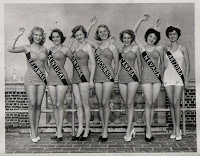 No beauty contests?  That’s un-American! Well, actually it is. The ban on beauty contests is the goal of some French politicians and it’s not a total ban.  Sadly.  However, American’s take note.  Please. Too many people don’t have a clue what true beauty is.  Hint: it’s not the part that turns to dust.

France is at least getting the idea. Their upper house of parliament voted to outlaw beauty contests for girls under 16 years old or be liable to prison and heavy fines. They want to halt the "hyper-sexualization" of youngsters. Finally!

During the Seventies, feminists protested outside the Miss America Pageant complaining that such pageants trivialize women.  I don’t usually cheer feminists on, but at least they noticed that men do not hold beauty pageants or handsome pageants. That would be dumb.  And it is for women too.  It promotes the value that anything less than physical beauty is, well, less.

The pageant supporters say: “Oh, they have a talent and their answer to an important question (the poise and intelligence portion of the contest) affects the outcome, so it’s not just about beauty.” Yeah, right.  And the swimsuit portion of the contest is about what?  Physical fitness?  Then why can’t a very fit but very skinny or husky woman ever compete?  Or how about women with scarred faces or wheel chairs or Down’s Syndrome or any number of conditions that will keep a woman off the cover of fashion magazines, advertisements and any and all beauty pageants.  If people believe beauty is not skin-deep, why the obsession with skin-deep beauty?
Toddlers and Tiaras
And would someone PLEASE tell my why the television show Toddlers and Tiaras is not grounds for child abuse?  In France, under the proposed law, pageant organizers who disregard the minimum age limit would face up to two years in prison and a €30,000 (around $33,000) fine.  That would be justice for screwing up a little girl’s mind and self-esteem. 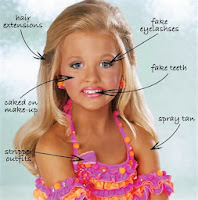 I watch very little TV but I watched  Toddlers and Tiaras after hearing about it.  It is worse than I imagined. Little girls practice, practice, practice, flaunting their stuff, getting dressed up in heavy makeup, foo-foo hairdos, and obscenely expensive dresses that have no other use outside of pageants. Pettiness and jealousy are instilled in these innocents alongside learning to walk just right and present a cute but sassy impression.

Parents insist that their little girls just luuuuuv these pageants and the minute they don’t enjoy them anymore they will quit.  Hello? If you brainwash a child as to what she needs to do to have value, then perhaps she might not notice the sick world she’s being raised in. Give the girls baby dolls and tricycles and let them play outside and make mud pies. To have their lives revolve around pageants, shows that the parents need therapy.  Leave little girls out of their parents’ personal self-esteem issues.

In France, the amended law will return to the lower house, the Assemblée National, for approval.  I pray it gets approved and then spreads to the United States and beyond.  Vanity is something to fight against, not to whip up into frenzy.

I know it’s nothing new. I know the problem begins with the parents in department stores, buying sexy little outfits thinking their little girls will look sooo cute wearing them.  But I wish the world would start waking up to this image of beauty that results in poor self-esteem, eating disorders and over-sexualization for girls.
Fixation on Beauty Leads to Abortions
The obsession with beauty results in more abortions. Maybe that has not crossed your stream of consciousness but think on it a moment. Consider that babies are not just aborted because they are inconvenient.

If our country was not so obsessed with physical beauty and perfection, then maybe 9 out of 10 babies with Downs Syndrome would not be killed in the womb. Maybe parents would not freak out if all their child had to give them was love rather than glamour and high achievement. Maybe more parents would consider the ultimate value is a soul and not long lashes, dimples, and good hair.

With less emphasis on beauty, maybe fewer women would die like Jennifer McKenna Morbelli of New Rochelle, NY.  Jennifer was a very pretty, 29-year-old kindergartner teacher, pregnant with a much-wanted baby.  When she learned that her baby had abnormalities, she no longer wanted it.  At the time of her death last February from a 33-week botched abortion, her name was still on an Internet baby gift registry.

Jennifer and her baby both could be alive today, loving each other and being loved by others.  Instead, obsession with beauty and perfection led to both their deaths.

When I was a contributing writer for Woman’s World magazine for 10 years and later co-authored the "Amazing Grace" series, I came across many, many stories of unborn babies given the diagnosis of a disability that had happy-ending scenarios. In some cases, either the ultrasound that caused a doctor to recommend abortion turned out totally wrong, or perhaps God healed the babies and they were born healthy.  Or, the baby did have a handicap but brought great joy and love to their families.

Babies are miracles and gifts from God. Their physical disabilities often cure people of spiritual disabilities. They were created for a reason. Some are so disabled as to be living saints, never able to sin, but given to a family to care for, so parents and siblings can grow in holiness.

I know my rant is not going to cure the world from obsessing about beauty. But I hope that one day, the United States can see clear to outlaw all the Little Miss pageants.  After all, lobotomies are no longer legal in this country.  We’ve learned it’s best to leave the brain intact. The same can be said about the self-esteem of little girls.
____________________________________________________________
For uplifting reading:   Big Hearted: Inspiring Stories From Everyday Families  a collection of stories on love and life, and  Dear God, I Don't Get It, children's fiction that presents faith through a fun and exciting story.
Follow Patti at Twitter or like her Facebook pages at Dear God Books,  Big Hearted Families, A GPS Guide to Heaven and Earth