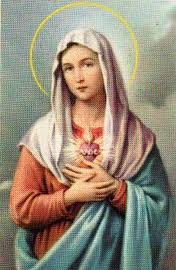 “You Catholics have that Mary thing,” a non-Catholic recently commented to a friend of mine.  Yes, we sure do and it’s one of the best things going.  Our Blessed Mother has real pull with our Savior–something we can all use.
A good word put in by her proved quite effective at the wedding at Cana where Jesus turned water into wine.  I heard a priest once point out that he had been to a lot of weddings but he’d never been to one where the guests drank all the wine.  “This wasn’t even a good miracle,” he claimed.   Yet, His mother’s intervention moved Jesus to perform his first recorded miracle.”  That Mary thing is a very good thing.


Following Jesus through Mary
God chose Mary for His mother from all eternity to get closer to us.  The human nature of Jesus, God’s only begotten son, is from her human nature. When we honor her, we do as Jesus did when He followed the Fourth Commandment and honored his mother. If God has so honored Mary as the daughter of God the Father, mother of God the Son, and spouse of God the Holy Spirit, how could we do otherwise?
Many non-Catholics think praying to Mary borders on idolatry.  According to 1Timothy 2:5, there is only one mediator between God and man–Jesus.   People use Timothy to claim we cannot go through Mary.  Yet, these same people do believe our friends on earth can pray for us. What better friend could we have praying for us than the Mother of Jesus?  We are still following scripture and going through Jesus; we are just taking His mother with us.
Mary and the Bible
The queenship of Mary and the tradition of going to her for intercession are rooted in the Old Testament. In the monarch of King David it was the King’s mother people went to with their requests. In the Bible, the right hand is the place of ultimate honor, (i.e. Psalm 110, Heb. 1:13), so the queen sitting at the king’s right hand symbolizes sharing in his authority. and illustrates that she is second only to the king himself.  Keeping in mind that Jesus descended from the house of David and the Bible repeatedly brings out the strong connection, Catholics are merely following the tradition already clearly laid out in the Bible.
The prayer the Hail Mary is also from the Bible. “Hail Mary, full of grace, the Lord is with you” (Luke 1:28),  “Blessed art though among women, and blessed is the fruit of thy womb” (v.42).   The next part, “Holy Mary” comes from, “you have found favor with God” (v. 30) and “Mother of God” comes from “mother of my Lord” (v.43).  The rest, “Pray for us sinners now and at the hour of our death.  Amen,” is a request to Mary to pray for us.  The Hail Mary is completely Biblical and focuses on the divinity of Jesus, so it is a Jesus-based prayer.
Surprisingly, devotion to Mary was once Protestant too.  Anyone reviewing the writings of the biggest fathers of the Reformation can read that, in spite of major disagreement with some Catholic teachings, they shared a strong devotion to Mary.  Luther, Calvin, and Zwinglini, the three fathers of the Reformation, each affirmed the Catholic doctrines that Mary is the Mother of God and a Perpetual Virgin. 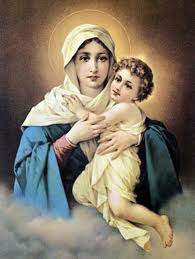 Marian Apparitions
Another aspect to Catholic devotion to Mary is the many apparitions attributed to her throughout history.  The Church is very slow and conservative about giving a nod of approval to any such claim. Only after much investigation does the Church sometimes acknowledge that a supernatural event has occurred.  Miracles and conversions often result through these apparitions and many sites have been visited by hundreds of thousands of pilgrims such as at Fatima, Portugal, and Lourdes, France.
No one is required to believe in an apparition as a requirement of the Catholic faith. However, it’s reasonable to judge apparitions worthy of belief after Church authority has investigated and accepted them.
An approved apparition with implications for our world today is Our Lady of Fatima. On May 13, 1917, three young children were tending a flock of sheep in a field in the outskirts of Fatima. The children were Lucia of Jesus, 10, Francisco Marto, 9, and his sister Jacinta, 7. (Francisco and Jacinta have been beatified and the case for beatification has opened for Sr. Lucia who died in 2005 at the age of 97.)
Around midday, they prayed the Rosary, as was their habit after lunch. A flash of light in the sky made them think lightening was warning of an impending storm.  Instead, there was another flash and then a beautiful Lady appeared, brighter than the sun and holding a rosary. She explained to the children: “I am the Lady of the Rosary” and told them to pray, do penance and to make sacrifices to save sinners.  She invited the children to return to the Cove of Iria during the next five consecutive months on the thirteenth at the very same hour.
As word of the children’s visions spread, thousands began to flock to Fatima in the ensuing months. In the last apparition on October 13, Our Lady had promised a miracle so that all would believe. A crowd estimated at 70,000—including many newspaper reporters and skeptics–came from all over in the pouring rain to the Cova da Iria. What took place became known as “Miracle of the Sun“. It had rained all day until the appointed time. Then, the steady rain suddenly ceased. The sun swirled in the sky and great shafts of color flooded the entire plateau of Fatima.
After several minutes, the sun returned to its place in the sky.  At that point, people were astonished to realize that their soaked clothing and everything around them had completely dried in spite of being soaked just moments earlier. Many secular newspapers testified to these events with eyewitness reports and photographs of the great crowd.
Years later, Pope John Paul II credited Our Lady of Fatima with saving him from the assassin’s bullet on May 13, 1981. Before a crowd of 20,000 in St. Peter’s Square at the Vatican, a Turkish citizen, Mehmet Ali Agca, fired four bullets at the pope from about 15 feet away.
John Paul II reflected: “Agca knew how to shoot, and he certainly shot to kill. Yet it was as if someone was guiding and deflecting that bullet.” That someone, John Paul believed, was the Lady of Fatima. “Could I forget that the event in St. Peter’s Square took place on the day and at the hour when(of) the first appearance of the Mother of Christ at Fatima in Portugal?  For in everything that happened to me on that very day, I felt that extraordinary motherly protection and care, which turned out to be stronger than the deadly bullet” (Memory and Identity pp. 159, 163).
During Pope John Paul II’s second visit to Fatima, he entrusted the “new evangelization” to her maternal care, giving her the title of “Our Lady of the New Evangelization.”
As part of the New Evangelization, the World Apostolate of Fatima encourages participation in Our Lady of Fatima’s Peace Plan as revealed to Lucia.  Every time Our Lady appeared to the three shepherd children, she asked them to pray the rosary and do penance for our sins and sins throughout the world. It is a plan to reunite us in friendship with Christ.
Our Lady told  Lucia that she promised to assist at the hour of death with all the graces necessary for salvation all those who, on the first Saturday of five consecutive months, go to Confession and receive Holy Communion, recite five decades of the Rosary and keep her company for a quarter of an hour while mediating on the mysteries of the Rosary with the intention of making reparation for sins.
Copyright 2011 Patti Maguire Armstrong
Posted by Patti Maguire Armstrong