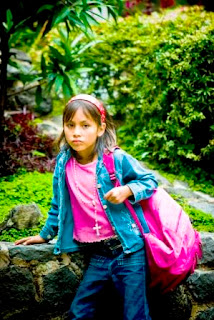 My son Luke once wrote for his high school newspaper. Last week, one of my daughters brought home the school newspaper and showed it to me. “Luke has a story in the paper,” she announced. Since Luke is soon to be twenty-six years old and works in Guatemala as the program director of the God’s Child Project, this surprised me.

I learned that it was a letter he sent to an old English teacher who read it to her students. One of the students is the editor of the school newspaper so she ran it for the whole school to read.  It’s definitely a story to share, so I’m keeping it going.

I tried to address this letter “Dear Nancy,” but it just did not look right to me. Even though you have given me permission to call you Nancy, I’m afraid you will always be Mrs. Dietz to me.

As you start your spring, we south of the border are gearing up for another five months of rain. Hopefully, I will be making a trip to Bismarck in the next few months. Preferably this will be soon enough for there to still be a bit of spring in the air. Summer is nice, but I’ve had four continuous years of it and could use some variety.
…I am going to share a story with you so that you can share it with your students. It is a story that I wish I had heard back in my rabble-rousing high school days.

Two years ago one of our social workers discovered six siblings living in a garbage dump outside of a village called Cuidad Vieja. This garbage dump was as close to hell on Earth as any place can be. Looming above it was an active volcano. A fine layer of ash fell like snow from its frequent eruptions.

In the garbage dump the volcano was not the only thing that burned. Decades of garbage lay in enormous mountains. Trapped gasses ignited underground fires, which caused a thick, chemical smoke to hang heavy in the air.

Amongst the waste, carcasses household pets decayed and emitted putrid smells while flies swarmed and swarmed and swarmed. In the torrent of this oppressive environment, there were also people. Little boys and girls climbed the mountains of burning garbage looking for food. They spent twelve hours every a day scouring these mounds of waste in search of a way to stay alive.

As is our mission, we worked to get these six siblings out of that environment. After putting the right pieces in place, we managed to find them a place to live and enrolled them in classes at one of our schools. Each student was given new clothes to wear and school supplies.

For two weeks, it seemed as though we had succeeded. But then, all six stopped showing up to school. We could not find them in their new homes. We went back to the garbage dump and sure enough, there they were.

It leads one to ask the question, “Why would any sane person choose a life in hell over a dignified house, and the chance for a good education?” We soon found out the answer.

In the hustle and bustle of getting these kids out of the dump and into new cloths, one of the girls slipped through the cracks and did not receive a new pair of shoes. Her name was Carmen. Carmen wore a pair of ragged shoes that she had found in the garbage dump. During her second week of school another girl noticed these shoes and made fun of her. She laughed at her for having such shabby shoes. Others joined in and made fun of her shoes.

Carmen had lived her whole life in a garbage dump. The social pressure of being made fun of for her shoes was new and completely dislodging for her. It was too much for her to take. She decided to leave school and return to the dump. At least in the dump no one made fun of her. She was the eldest sibling, and her brothers and sisters decided that if she was going to return to the garbage dump, then they were all going to return together.

This story does have a happy ending. In the end we were able to convince the children to return to school where they remain today. As I write this letter, they are studying in a classroom 100 feet away.
I tell you this story and ask you to share it with your students for this reason. Six people’s lives were almost destroyed because of one unkind comment. All the girl who made the comment did was make fun of another girl’s shoes. Surely all of us have done worse. I know I have. If asked why she did it, I’m sure she would say something we hear all too often, “It was just a joke.” But the girl likely could never have imagined how far the negative consequences of that “joke” could have reached. But that joke almost brought destroyed the life of six children. Children in garbage dumps don’t survive long. If their health does not give out by the time they reach adolescents, exploiters or human traffickers prey them on.

Though we will never fully no how far our unkind and kind acts will reach, I believe that both reach further than any of us could ever imagine. Every day we are presented with a thousand opportunities to choose kindness or unkindness.

I no longer believe in trivial acts. Everything we do carries enormous weight. Everything we do has repercussions that will last long after we have left this Earth. If we look at the world like this, I think it becomes nearly impossible to choose unkindness over kindness.
Even though others irritate us sometimes, and almost invite nastiness, none of us know what another is going through. What we can be sure of is that everyone deserves our kindness. And we can all be thankful that life gives us limitless opportunities to give it.

So, if T.S. Eliot insists that April is the cruelest month of the year, well, maybe he just needed a hug.

After setting off hitch-hiking post college from Chile to Alaska, Luke Maguire Armstrong made it as far as Guatemala. There he is the Director of The GOD´S CHILD Project´s Guatemala Social Service programs which work to "break the chains of poverty through education and formation. He is the author of iPoems for the Dolphins to Click Home About and  co-authored Amazing Grace for Survivors http://www.ascensionpress.com/shop/scripts/prodView.asp?idproduct=470  and  The Expeditioner's Guide to the World